SAINTS FOR THE NEW YEAR

It has been a custom in our monasteries to each draw a saint as patron for the coming year. The usual famous saints, as apostles, great martyrs, virgins, bishops, and others always appear.  In the past few years we had added to the list, some of the more modern saints, as Maxmillian Kolbe, Kateri Tekwitha, Damien of Molokai. This year I asked if we could have a second drawing for an obscure saint whom most of us had never heard of. In my study of saints and birds I came across so many wonderful saints (many totally unrelated to birds or animals), all of whom had great stories to tell and lessons to be learned from their lives.
This year I decided to concentrate on women from many centuries ago. Among them the Celtic Sts. Bega, Pega, & Milburga,  plus Godelina & Pharaildis, who were Flemish.


One of the new ones:
ST. GODELINA of GISTEL ( Godelieve) born around 1049 and died 1070. Tradition states that she was pious and beautiful young woman, much sought after by suitors. Godelina wanted to became a nun but a nobleman named Bertolf was determined to marry her and successfully invoked the help of her father. Her mother-in-law soon forced the young bride to live in a narrow cell, with little food to support her. What she had, Godelina shared with the poor. Bertolf also spread false rumors about Godelina, and seemingly the marriage was not consummated. Godelina managed to escape to the home of her father but he appealed to the local Bishop and the Count of Flanders and managed to have Bertolf restore Godelina to her rightful position as his wife. Godelina returned to Gistel but soon after, at the order of Bertolf, was strangled by two servants and thrown into a pool making it appear as if she had died a natural death. 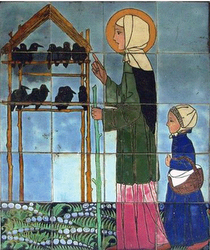 Bertolf married again and had a daughter who was born blind. Tradition states that Bertolf's daughter was cured through the intercession of St Godelina. Bertolf, who was repentant of his crimes, went to Rome to obtain absolution. He went on a pilgrimage to the Holy Land, and became a monk at St-Winoc at Bergues. Bertolf's daughter established a Benedictine monastery at Gistel, which was dedicated to St. Godelina. Bertolf’s daughter joined this new community as a nun.
Drogo, a monk at the former St. Winnok abbey in Bergues, wrote Godelina's biography, the Vita Godeliph, about ten years after her death.


Godelina's feast day is July 6. The story of her life tells how after fleeing from the home of her husband she worked in the fields.  When she needed to go to church for prayer, she told the cows to go to the barn and wait for her. This painting in the Church at Gistel shows her with the crows.
Posted by mother hildegard at 2:07 PM No comments: