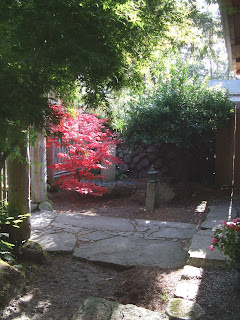 The designer of our Chapel's Japanese garden recently contacted us, which made me go to her website.  She has some lovely photos of the garden, plus many more of their work.

Today is the feast of St. Agnes, virgin and martyr of the 4th C.  and the birthday of our Mother Dilecta.

St. Agnes  was martyred on 21st January c305 AD in the Piazza Navarone in Rome, at the  age of twelve or thirteen. The son of the Governor of Rome proposed marriage, but Agnes preferred virginity.
Her refusal to accept his hand, sent the Governor into a rage, and he threatened to expose Agnes’s parents as Christians, and so face certain death. He tried to persuade Agnes to change her mind by making her walk naked through the city, but her hair miraculously grew to cover her body and save her nakedness. This could not change her mind, so Agnes was burned at the stake, but the flames refused to touch her. She was sent to the lions, who made no attack on her. The son of the Governor goaded the lions who then attacked and killed him. The Father, distraught at his son’s death, pleaded with Agnes to pray for him, and at her intercession he was restored to health. Undeterred, the Governor had Agnes beheaded. Her body was buried in the Catacombs outside the city.

Because of the resemblance of her name, Agnes to agnus (Latin for lamb) she is often represented in Art carrying a lamb. An interesting custom is observed on her feast day. Two lambs are brought from the Trappist Abbey of  Three Fountains  in Rome to the Pope to be blessed. On Holy Thursday they are shorn, and from the wool  the pallium  is woven by the Benedictine nuns at St. Cecelia's in Trastevere. This is the thin stole the Holy Father  gives to a newly consecrated archbishop as a sign of his jurisdiction and his union with the Head of the Church.

St. Agnes is also a patroness of gardeners, which is fitting as Mother Dilecta is  in charge of the monastery gardens. We always have a Mexican meal for MD and today being Friday, we will have crab enchiladas, chili rellenos, etc. .  OLE!!!
Posted by mother hildegard at 9:47 AM 2 comments:

In July of 2010 a German TV crew came to OLR to film life on the farm as part of a TV series called “mareTV” (“Ocean TV”) which is broadcast twice a month on German television channel NDR. Each film covers a different region or country by the sea with spectacular footage and in-depth stories about people and their relationship to the sea. The director was Carola Meyer. She and her two photographers spent several days here, during the busiest time but managed to film a lot of our life. It aired in Germany December 16th. We were not the only ones filmed but rather a lot of the Seattle area as well (shades of Natl. Geographic!) I have not yet been able to download it but seems all they took for the several days here is ff:
"The nuns of Shaw Island  are a prime example of the special way of life on the Pacific coast. The Benedictine monastery of Our Lady of the Rock even manages a farm. This is not easy on the island, because they never know whether they get the hay dry in the barn. And their alpacas, relatives of the llama, are indeed divine beings, but a little sneaky. Reverend Mother Therese and her sisters are nevertheless certain: it is their place, here they belong".
Posted by mother hildegard at 9:10 PM 1 comment: