A SAINT FOR TODAY’S YOUTH

Recently, we had the pleasure of a visit by our Archbishop  Peter Sartain a man who obviously has many friends- in heaven.  While chatting we found a mutual “heavenly” friend so I thought he should be next in my discussion about saints. I first learned about BLESSED PIER GIORGIO FRASSATI when visiting the Benedictine Abbey of San Vincenzo in Rochetta, Italy in 1993. I saw a photo of him on the wall in the Capuchin priest’s house after Mass one evening and inquired about it.  The monk took it off the wall and gave it to me. When I returned home I put it on my desk thinking he would be a great patron for the youth I work with. Our Prioress saw it one day and asked me who the “movie star” was. The Archbishop was able to top my story. He first met up with the saint in the early 70s while in Rome. He later became friends with the family and corresponded with Bl. Pier’s sister until she died a few years ago. The Archbishop sent me a 2nd class relic from the sheet on the saint’s death bed, which was sent to him by a cousin of the blessed. It is very old, dated from the 1930s so in itself  is a relic. 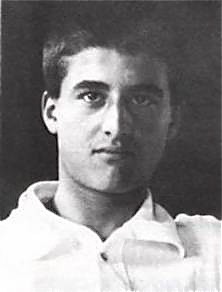 Young people today who are looking for a role model will find someone to identify with in this handsome young athlete who combined a deep love for Christ, a desire to serve the needy, and a mission to impart Christian ideals into society and politics.
He was born in Turin, Italy in 1901. His father, an agnostic, was the founder and director of the liberal newspaper, La Stampa, and was influential in Italian politics, serving as senator, and later Italy's ambassador to Germany.
Bl. Pier Giorgio developed a deep spiritual life which he never hesitated to share with his friends. He dedicated much of his spare time to serving the sick and the needy. He decided to become a mining engineer so he could "serve Christ better among the miners," as he told a friend. His studies, however, did not keep him from his love of the outdoors or social activism.

It was later found that beneath his joy and outgoing nature he concealed the amazing life of a mystic. Love for Jesus motivated his actions. He assisted at Mass and Communion daily and became a Dominican tertiary. He felt a strong urge to be near the Blessed Sacrament. During nocturnal adoration, he would spend all night on his knees in deep prayer. In spite of- or because of this- he was a great influence on his friends and fellow students.

One of the joys of his life was mountain climbing. He wrote to a friend, "I left my heart on the mountain peaks and I hope to retrieve it this summer when I climb Mt. Blanc. If my studies permitted, I would spend whole days on the mountains admiring in that pure atmosphere the magnificence of God."

In late June 1925 Bl. Pier Giorgio was afflicted by an acute attack of poliomyelitis which doctors thought he caught from the poor and sick who he tended. Neglecting his own health because his grandmother was dying, his illness was too advanced for anyone to treat when doctors discovered how weak he was. Bl. Pier Giorgio died on July 4, 1925, at the age of 24. He is often called the saint of the Beatitudes, as he lived each one as given to us by Christ.
"In God's marvelous plan, Divine Providence often uses the tiniest twigs to do good works... What would life be without acts of charity?"

Posted by mother hildegard at 3:50 PM