MISSIONARY in the MIDWEST


VENERABLE FATHER SAMUEL CHARLES MAZZUCHELLI born in Milan, Italy on November 4, 1806. He became a member of the Dominican Order and was ordained in the USA. He was sent in 1830 to the island of  Mackinac to be the only permanent priest in the upper Great Lakes region. He founded the first Catholic school in Wisconsin at Green Bay and visited various Native American tribes as a missionary. During his time in Wisconsin, he faced a number of challenges, such as hostility from other Christian denominations. 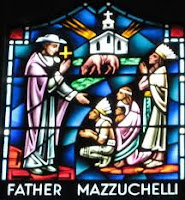 He then went to what would later become the city of Dubuque, Iowa. While there, he reorganized the parish and named it Saint Raphael’s, which later became the Cathedral parish when the Dubuque Diocese was formed in 1837. He assisted Bishop Mathias Loras during the first few years after the founding of the Diocese. He also worked quite extensively in what would eventually become the Diocese of Madison. He  founded many churches in Iowa, Wisconsin, and Illinois, and founded St Clara Academy (today Dominican University of  Illinois), a frontier school for young women. In 1849, he founded the Sinsinawa Dominican Sisters.

Known for his skill in music, painting, and architecture, he designed many of the churches built. 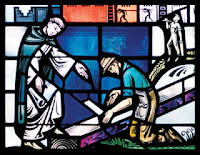 Many remembered him as a kind and gentlemanly priest. Fr. Mazzuchelli was able to break down the cultural barriers that existed at the time and appeal to many different ethnic groups. The Irish he ministered to called him Father Matthew Kelly. He died on February 23, 1864 after contracting an illness from a sick parishoner that he had visited.

Early in April 2006, Italian doctors charged by the Vatican with determining the validity of miracles decided after careful study that the curing of Robert Uselmann of cancer was indeed a miracle. Robert, a resident of Madison, Wisconsin had gone to Sinsinawa Mound with his family in 2001 to pray Father Mazzuchelli for his assistance in curing him of cancer. While there he prayed with the Sisters. Robert Uselmann would later find that he had been cured of the cancer, and it was established that there was no medical explanation for this cure.    As a result, Ven. Father Mazzuchelli is now eligible for beatification.

"A Christian who comprehends the sublimity of revelation and sees how perfectly it is adapted to rescue men from the misfortunes of his present state, does not make civilization consist in the form of government, in civil laws, in the regulations of society, in human sciences or arts, in the courtesies of life, in riches, in social elegances,  but he believes it lives in the knowledge of God and in the practice of the moral virtues. The savage become Christian, may in truth be called civilized in an eminent degree, for the reason that his knowledge of God and purity of morals illumine his intellect and fill it with religious science, infinitely beyond the entire array of human discoveries.

And besides, to what does it all really aim--this world of books, of studies, of gold, of grandeur, of elegances of life, of progress, whether civil, literary or social? Their one object is to attain to a certain degree of happiness. But the Catholic Indian is put in possession by his religion of that moral and social felicity, which not Solomon himself with all his wisdom and royal magnificence could enjoy." (From Mazzuchelli's Memoirs).


Posted by mother hildegard at 9:08 AM