NEW SAINTS FROM A NEW POPE

Our Holy Father Pope Francis has been very busy since the first days of his election to the Papacy (March 13, 2013). Several weeks after, on March 27, he proclaimed Venerable, Moises Lira Serafin of Mexico and Antonio Kowalczyk of Canada. 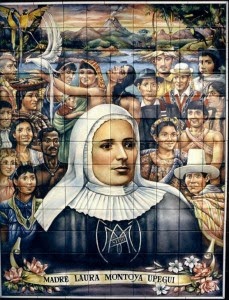 This adds 5 more names to the heavenly roster for the AMERICAS.
These we will deal with in other blogs.

Two months later (May 12) he canonized his first saints:  LAURA MONTOYA UPEGUI (1874-1949) from COLUMBIA, its first saint- a nun who gave her life to the  indigenous people  of her country.

As a young woman, Laura became an elementary schoolteacher to help support her widowed mother. Having developed her spiritual life through devotion to the Eucharist and meditation of the Scriptures, Laura felt drawn to the religious life of the Discalced Carmelites. Yet her zeal also instilled in her a longing for an active, missionary apostolate, particularly to assist the Indian peoples of South America. Laura was determined to combat the anti-Indian bigotry in her society, and to give her own life to the Indians’ evangelization. Finally, at the age of forty, having resolved to “become an Indian with the Indians to win them all for Christ,” Laura journeyed to Dabeiba with four other women to begin a religious congregation devoted to the service of the Indians, the Missionaries of Mary Immaculate and Saint Catherine of Siena. As mother superior, she imparted to the congregation a rule that combined contemplation with action. After having spent the last nine years of her life confined to a wheelchair, Mother Laura died on October 21, 1949.

The Holy Father held out St. Laura of St. Catherine as a source of inspiration to the country's peace process, attempted after decades-long conflict between rebels and government forces. Pope Francis prayed that "Colombia's beloved children continue to work for peace and just development of the country."  The first pope from the Jesuit order, which is known for its missionary zeal, praised the Colombian saint for "instilling hope" in the indigenous peoples. He said she taught them in a way that "respected their culture."

On the same day the Holy Father also canonized another Latin American woman, MARIA GUADALUPE GARCIA ZAVALA  (1878- 1963) of  MEXICO, who dedicated herself to nursing the sick and helped Catholics avoid persecution during a government crackdown on the faith in the 1920s. Also known as Mother Lupita, she hid the Guadalajara archbishop in an eye clinic for more than a year after fearful local Catholic families refused to shelter him. Pope Francis prayed that the new Mexican saint's intercession could help the nation "eradicate all the violence and insecurity," an apparent reference to years of bloodshed and other crime largely linked to powerful drug trafficking clans. 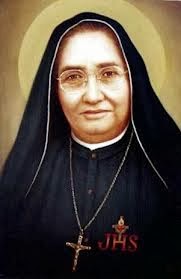 As a child, Maria Guadalupe of Zapopan, Mexico, would frequently visit the town’s Basilica. At the age of twenty-three, Maria suddenly changed her mind about plans to marry, sensing that she had a religious vocation. Upon learning of this, her spiritual director invited her to co-found with him a religious congregation for the care of hospital patients. In 1901 the “Handmaids of St. Margaret Mary and the Poor” was founded, with Maria as the congregation’s first mother superior.

She nursed the sick physically and spiritually, sustained by her devotion to the Sacred Heart of Jesus, while leading a life of strict poverty, in accord with her maxim that she and her fellow sisters should be “poor with the poor.” During the worst years of the Mexican government’s persecution of the Catholic Church, Mother Maria risked her own life to shelter priests at her hospital. Her charity to those persecuting the Church prompted some of them to defend the hospital from attacks. Mother Maria died on June 24, 1963.

The pope also hailed the Mexican saint for renouncing a comfortable life to work with the sick and poor, even kneeling on the bare floor of the hospital before the patients to serve them with "tenderness and compassion." 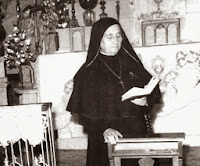 Mother Lupita's example, said the Holy Father, should encourage people not to "get wrapped up in themselves, their own problems, their own ideas, their own interests, but to go out and meet those who need attention, comprehension, help" and other assistance.


Posted by mother hildegard at 9:51 AM