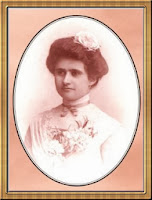 Our next lay saint to be is  VENERABLE SILVIA CARDOSO FERREIRO da SILVA better known as "Dona Sylvia".

One of the problems with little known holy people is there is nothing about them in English and I am at the mercy of Google translator-  which is at times almost un-intelligable. But this is what I could glean from several sources.

Silvia was born in 1882 in Portugal the oldest of  four children of Umbelino Manuel Ferreira da Silva and Joaquina da Conceição Cardoso Emilia. Following the death of her fiance, Silvia devoted herself to the care of poor children, founded homes for the abandoned, organized retreats for laity, and set an example by her love of Christ.

In 1918 she became sick with the flu that killed so many thousands in Europe. After this her apostolate became tireless.

She always carried a kind of bag where everything fit: rosaries and devotional medals and brochures, and clothing for the poor. The poor were part of her life. She was a woman of strong and deep piety, faith and hope, always caring for others. She not only cared for their bodies but also their souls.

Dona Silvia loved children always seeing Christ in them. She started homes for girls and for boys, soup kitchens, retreat houses, farms centers where the poor could have some leisure time but also be educated.  When she sensed that a boy was called to the priesthood, she encouraged him and paid for his education.