On May 10 it was announced that Pope Francis  will declare POPE PAUL VI blessed at a beatification ceremony in the Vatican on October 19, 2014. The Holy Father issued a decree acknowledging a miracle attributed to the intercession of his predecessor, clearing the way for his beatification. Pope Paul VI was born Giovanni Battista Montini on Sept. 26, 1897 in Concesio, Italy, and died on August 6, 1978. His pontificate from 1963 to 1978, was between the two great Popes, John XXIII and John Paul II, whom Pope Francis declared saints on April 27 in the Vatican.

The attributed miracle involves an unborn child in the 1990s in California, who was found to have a serious health problem that posed a high risk of brain damage. The child’s bladder was damaged as well.  Abortion was offered as an option, but the mother refused, instead taking advice from a nun who was a friend of the family. The mother prayed for Paul VI’s intercession using a fragment of the pope’s vestments that the nun had given her.
Ten weeks later, the results of the medical tests showed a substantial improvement in the child’s health, and he was born by Caesarean section in the 39th week of pregnancy. He is now a healthy adolescent and considered to be completely healed.

Our American foundation has always had a direct connection to Pope Paul as he was most instrumental in our Foundress making her way to American soil.

Having obtained the permission of the Papal Nnuncio of Paris, Cardinal Angelo Roncalli, the future Pope St. John XXIII,  Mother Benedict Duss traveled to Rome to meet with Cardinal Giovanni Montini, who later became Pope Paul VI. She finally met with Pope Pius XII, who gave her permission to begin the founding of a contemplative order in the U.S. In 1946, Mother Benedict and Mother Mary Aline Trilles de Warren arrived in New York with just $20 in their pockets.

Although Mother Benedict met with many obstacles, she also received support from many in the Church, especially Pope Paul VI. Through a friendship of many years, Pope Paul VI offered wisdom and practical advice, suggesting from the beginning that if the new monastery was to attract the dedication of American women, the nuns must each be encouraged to have a professional basis in their religious life.

Pope Paul VI also asked Mother Benedict to maintain the Latin chants and that the abbey maintain the tradition of hospitality to all people.

Pope Paul is most remembered for Humanae Vitae (Human Life) an encyclical written in 1968. Subtitled On the Regulation of Birth, it re-affirms the orthodox teaching of the Catholic Church regarding married love, responsible parenthood, and the continued rejection of most forms of birth control.

I myself met Pope Paul VI in a semi private audience in the late 60s when I was living in Europe. Pater Doktor Spellucci was the Holy Father’s secretary for German affairs and made sure I was able to attend special Masses and audiences when I was in the Vatican.  I was able to touch the hand of the saintly pope as well as get many photos, an event vivid in my mind after all these years.

With a friendship that began here on earth, I am sure Lady Abbess Benedict is rejoicing with him! 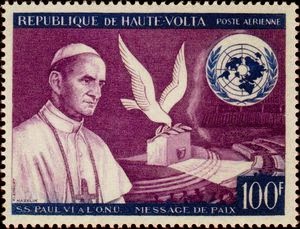 Posted by mother hildegard at 10:42 AM