Because DOGS are the # one pet in our country they get a separate Blog! Several interesting saints have their welfare in mind.  First is ST. HUBERT of LIEGE ( c. 656–727 ) who is the patron saint of dogs, hunters, mathematicians, opticians, and metalworkers. Known as the Apostle of the Ardennes, he was called upon, until the early 20th century, to cure rabies through the use of the traditional St Hubert's Key.


Like many nobles of the time, Hubert was addicted to the chase. His wife died giving birth to their son, and Hubert retreated from the court, withdrawing into the forested Ardennes, giving himself up entirely to hunting. But a spiritual revelation was to change his life. On Good Friday morning, when the faithful were crowding the churches, Hubert sallied forth to the chase. As he was pursuing a magnificent stag or hart, the animal turned and, as the pious legend narrates, he was astounded at perceiving a crucifix standing between its antlers, while he heard a voice saying: "Hubert, unless you turn to the Lord, and lead a holy life, you shall quickly go down into hell". Hubert dismounted, prostrated himself and said, "Lord, what would You have me do?" He received the answer, "Go and seek Lambert, and he will instruct you."

During Hubert's religious vision, the Hirsch is said to have lectured Hubert into holding animals in higher regard and having compassion for them as God's creatures with a value in their own right. For example, the hunter ought to only shoot when a humane, clean and quick kill is assured. He ought shoot only old stags past their prime breeding years and to relinquish a much anticipated shot on a trophy to instead euthanize a sick or injured animal that might appear on the scene. Further, one ought never shoot a female with young in tow to assure the young deer have a mother to guide them to food during the winter. Such is the legacy of Hubert who still today is taught and held in high regard in the extensive and rigorous German and Austrian hunter education courses. He is almost always pictured with his hunting dog (s) and often holding them back from the kill.

Our next patron, ST ROCH (1295-1327) , was a most gentle soul. On the death of his noble parents in his twentieth year he distributed all his worldly goods among the poor like Francis of Assisi and set out as a mendicant pilgrim for Rome. Coming into Italy during an epidemic of the Black plague, he was very diligent in tending the sick.  Ministering at Piacenza he himself finally fell ill.

He was expelled from the town; and withdrew into the forest, where he made himself a hut of boughs and leaves, which was miraculously supplied with water by a spring that arose in the place.He would have perished had not a dog belonging to a nobleman named Gothard Palastrelli supplied him with bread and licked his wounds, healing them. Count Gothard, following his hunting dog that carried the bread, discovered St Roch and became his acolyte. In art, he is always with his dog.


ST. VITUS was a Christian saint from Sicily. He died as a martyr during the persecution of Christians by co-ruling Roman Emperors Diocletian and Maximian in 303. Vitus is counted as one of the Fourteen Holy Helpers of the Roman Catholic Church.

He is also patron of, dogs, against animal attacks, against dog bites,  snake bites, against lightening and storms, Czech Republic, actors and dancers, epileptics, and nervous disorders and oversleeping.

I could not find anywhere why St. V is patron of dogs, unless it  has to do with the dog bites, rabies and the relation to nervous disorders- his speciality!


ST. MARTIN DE PORRES, last but not least, is our best known patron of domestic animals. He was born in Lima, Peru, in 1579. His father was a Spanish gentleman and his mother a coloured freed-woman from Panama. At fifteen, he became a lay brother at the Dominican Friary at Lima and spent his whole life there-as a barber, farm laborer, almoner, and infirmarian- among other things.

St. Martin had a great desire to go off to some foreign mission and thus earn the palm of martyrdom. However, since this was not possible, he made a martyr out of his body, devoting himself to ceaseless and severe penances. In turn, God endowed him with many graces and wondrous gifts, such as, aerial flights and bi-location.

St. Martin's love was all-embracing, shown equally to humans and to animals, including vermin, and he maintained a cat and dog hospital at his sister's house. He also possessed spiritual wisdom, demonstrated in resolving theological problems for the learned of his Order and for bishops. A close friend of St. Rose of Lima, he died in 1639 and was canonized on May 6, 1962. His feast day is November 3. 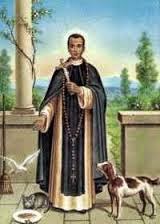 Posted by mother hildegard at 11:38 AM