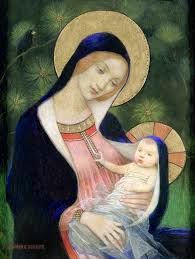 This year I chose as my personal Christmas card the lovely  "Madonna of the Fir Tree" which I first saw some years ago when our then Archbishop Brunette used it as his greeting. Other than the gentle, vivid loveliness of the piece, what strikes me is the crow sitting in a tree to the left of the Virgin.  A little research on the artist let me to this information:.

Marianne Stokes (1855-1927), born Marianne Preindlsberger in the Austrian province of Styria, was an Austrian painter. She settled in England after her marriage to Adrian Scott Stokes (1854-1935), the landscape painter, whom she had met in Pont-Aven. Marianne  was considered one of the leading artists in Victorian England. Her  paintings were met with much love and admiration, both for their appeal and her devotion to the rustic genre style, no matter the subject.
Posted by mother hildegard at 10:06 AM