FRIEND of the POOR- ENEMY of the STATE 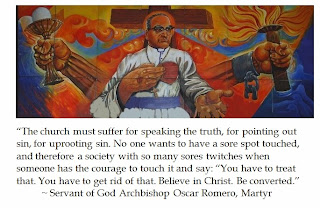 On May 23 The Holy Father, will add another blessed to the roster of saints in the Americas.

Slain Salvadoran Archbishop Oscar Romero, the murdered prelate of the people whose sainthood cause languished under previous popes but has been fast-tracked by Pope Francis, is to be beatified in San Salvador. 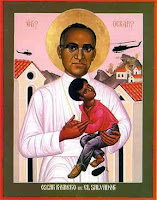 The ceremony will be in Plaza Divino Salvador del Mundo (Plaza of The Divine Savior of the People) Cardinal Angelo Amato, prefect of the Congregation for Saints' Causes, will celebrate the Mass.


Oscar Romero was archbishop of San Salvador during the bloody and tension-filled time leading up to his country's 1979-1992 civil war. Shot dead while celebrating Mass in 1980, the archbishop has long been considered a saint by many in Latin America, but the official Vatican process of sainthood had lingered for years.  While some question his politics, all consider him a saint, who cared only for the welfare of his oppressed people.

Some had speculated that there was unease among church prelates, including Popes John Paul II and Benedict XVI, because of the Archbishop's embrace of liberation theology, a type of Christian theology that posits that Christ did not just seek liberation only from sin but every type of oppression.  There was decades-long debate in the Vatican as to whether the people's archbishop’s death had more to do with politics or faith. 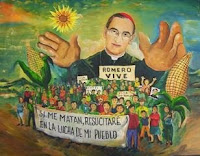 Francis, the first Latin American pope, paved the way for Romero's beatification in February when he formally decreed that the prelate was assassinated as a martyr for the Catholic faith. While in the sainthood process beatification normally requires that a miracle be proven to have been caused by the deceased person, martyrs of the faith do not have to meet that requirement.

Archbishop Romero is the most prominent victim of the 75,000 people believed to have been killed in El Salvador’s bloody civil war, which went on from 1980 to 1992. No one was ever prosecuted for his assassination, but right-wing death squads have long been suspected.

A single bullet hit him in the heart as he lifted the Consecrated Host.  He died a martyr and drew the attention of world leaders who began to suspect that something wasn't right in El Salvador. He purchased this attention with his blood.