A NEW FERRY- AND THE SAMISH 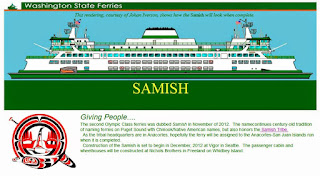 We have a new, much needed, ferry in the San Juans this summer. It was named the  SAMISH and is the the second 144-car ferry. The total cost of the vessel was approximately $126.45 million (people wonder why we don’t have more ferries!). Who are the Samish the ferry is named after?

The SAMISH ( means “those who stand up and give) peoples were some 45 to 60 thousand strong in the 1800s throughout the San Juan Islands. They were  comprised of the Salmon Fishing People, the Planting and Gathering People, and the Shell Fish Gathering People, all nomadic tribes. Linguistically and culturally, the Tribe is grouped as Coast Salish, speaking a dialect of Coast Salish known as “Straits Salish,” rather than Lushsootseed dialect of some of our immediate neighbors to the east.

Through the years, they were assigned to reservations dominated by other Tribes, for instance, the Swinomish Indians (Anacortes)  and the Tulalip Tribes (Marysville). They are also enrolled in the Samish Indian Nation, formerly known as the Samish Indian Tribe, which regained federal recognition in 1996.

As part of a larger Coast Salish cultural complex the Samish formed a village community, which consisted of several important social groupings. These groupings can be listed as 4 units: the family, the house group, the villages, and the tribe as a whole. Samish tribal members married outside of their groupings, so as to create a network of “kinships.” These kinships regulated both the internal and external relationships between the families, the house groups, the villages, and the tribe as a whole. The Tribe relied on these relationships during bad times in order to be able to access areas of food and shelter that was not currently in their home territory.


Samish people were respected for their spiritual strength as well as their skillful carving of canoes and construction of longhouses.In 1847 the Tribe had over 2,000 members and because of the raids from Northern Tribes and epidemics of measles, small pox, and the ague (flu), the population of the tribe was decreased to approximately 150 at the time of the signing of the Point Elliott Treaty in 1855. This was a treaty in which Northwest Indians ceded their homelands in exchange for federal protection and benefits. Reportedly, 113 Samish were present on the treaty grounds for the signing. The signatories also included a dozen other tribes.

For reasons unknown, the tribe names Samish and Lummi were left off the final draft.
However, many Samish refused to go to the reservations and stayed in their traditional territory. They were often confused with the Skagit, and when they went to the Swinomish Reservation, they received only six household land allotments for the entire Tribe.

Their chief declined the US government’s offer of a reservation because they didn’t want to leave their ancestral lands. Three years later, their lands were taken from them, no deed given. Now only a handful of their tribe remain, approximately 1600 world wide and 60 here at home. Only 8 Samish people know how to speak the original language because it was forbidden once the government took over the lands Although the tribe is scattered throughout the San Juans, their home base is in Anacortes.

Many members went to Guemes Island to establish New Guemes (now referred to as "Potlatch Beach"), where they built a longhouse that housed more than 100 people. By 1912, the Samish had either moved onto the Swinomish Reservation or into other communities. They had been pushed off the island by white settlers, as the Samish had occupied the land with the only fresh water. 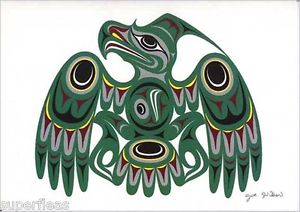 The Samish fished in the islands and channels off the coast of Skagit County. They had villages on Samish, Guemes, and Fidalgo Islands, and fished and harvested resources there and in the San Juan Islands.  After the Treaty, some Samish moved to the Swinomish or Lummi reservations.


The Samish also were noted for their spiritual heritage. When foods were harvested, they were believed to be survival gifts from ancestors, to whom they responded with thanksgiving prayers or songs.
Posted by mother hildegard at 2:20 PM