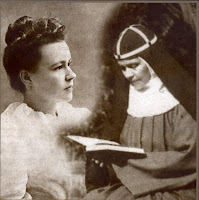 We will soon have two new saints in our list of Americans both of whom lived and died in our lifetime.  The first is BLESSED ELIZABETH HESSELBLAD (1870-1957), soon to be canonized. She was a Swedish immigrant who converted to Catholicism, re-founded the Bridgettine order in Europe, and saved Jews during World War II.   Elizabeth was the fifth of thirteen children and due to economic hardships she came to New York at the age of 18 to help her family.  She studied nursing and did home care for the sick and aged. Coming into contact with so many Catholics in the area, sparked her interest, which led eventually to her conversion. She was Baptized at the Convent of the Visitation in Washington D.C.

In 1902 she pilgrimed to Rome, where she was Confirmed. She briefly returned to NY, but then returned to Rome where she startd her religious life. In 1906 she received the habit of the Brigittines. She petitioned the Holy See to be able to make religious vows under the Rule of the Order which Brigid had founded, and had been a prominent presence in the Church in Sweden before the Protestant Reformation had taken hold there. She received special permission for this from Pope Pius X in 1906, at which time she assumed the Bridgettine religious habit, including its distinctive element of a silver crown. She worked diligently to restore the Order in Italy and Sweden. 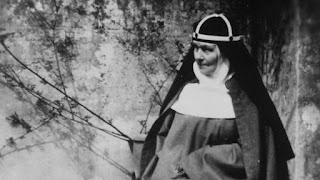 Elizabeth attempted to revive interest in the Order and its founder in both Sweden and Rome. Her proposal to establish a monastery of the Order on the site where Bridget had lived received no volunteers from the few monasteries of the Order still in existence. Giving up on the intention of following the established way of life in the Order, she proposed one which included the care of the sick. To this end she was joined by three young women from England, whom she received in 1911. Their particular mission was to pray and work, especially for the unity of Scandinavian Christians with the Catholic Church.She worked at efforts at inter-religious dialogue and against racism, and became known as "the second Bridget".

She returned to her homeland of Sweden in 1923, where she was able to establish a community in Djursholm, while she worked nursing the sick poor. The new congregation was established in England in 1931. That same year, Elizabeth obtained the House of St. Bridget in Rome for her new congregation. A foundation was made in India in 1937 which drew many new members.

The hiding of dozens of people at the motherhouse was recounted by an Italian Jew, Piero Piperno, as part of his testimony on behalf of another Bridgettine, Brighton-born Mother Mary Richard Beauchamp Hambrough, whose Cause was opened five years ago.

According to Piero, “We were three families, 13 in all. We stayed in three rooms, all the men in one, except an uncle who slept in a dark, small room with no windows, and another two for the women. In the beginning we all ate in one room by ourselves.”

For six months, until the Allies liberated Rome,  the Piperno family hid in the convent, at every moment fearing potential arrest. The nuns did not discriminate between the people they helped, he said, and took in Fascist refugees as well as Jews.

Piero said: “Something which bothered me back then, but which I now understand, was that the nuns that helped us also helped Fascist families. There was great solidarity because everybody was suffering and everybody finally realized we were all in the same boat. “

In addition to their profound humanity and courage, it was noted that the nuns never exerted any pressure on their Jewish guests to convert, allowing them to live their Jewish faith without any difficulty. 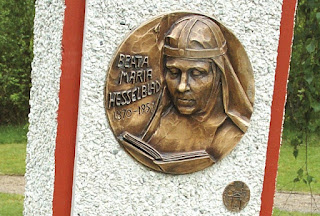 In  2004 she was recognized by Yad Vashem as one of the Righteous Among the Nations for this work. Elizabeth was beatified by Pope John Paul II in 2000.

Posted by mother hildegard at 12:56 PM