IRISH JESUIT of the POOR 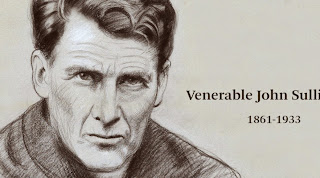 Another Jesuit who knew our last  saint to be, Father Willie Doyle, is VENERABLE FATHER JOHN SULLIVAN,SJ (1861-1933).  He was an Irish Catholic priest widely known for his life of prayer and personal sacrifice. He is recognized for his dedicated work with the poor and afflicted, spending much of his time walking and cycling to visit those who were troubled, sick and dying in the villages in County Kildare, Ireland where he taught from 1907 until his death. From the 1920s onwards many people testified to the healing power of his prayers although he never claimed any credit for himself.

John Sullivan was born into a wealthy Dublin family. His father Edward, a Protestant, was a successful barrister who would later become the Lord Chancellor of Ireland. His mother, Elizabeth Bailey, was a Catholic from a prominent land-owning family in Passage West, County Cork. He was the youngest of five children and grew up in privilege in late 19th Century Dublin society, raised as a Protestant as was traditional in Ireland at the time for sons of Protestant fathers and Catholic mothers. Following in his father's footsteps, John read classics at Trinity College Dublin.

John was received into the Catholic Church on 21 December 1896 by Father Michael Gavin SJ at Farm St Church Mayfair, in central London. He began his Jesuit novitiate in 1900 at St Stanislaus College Tullabeg in County Offaly (we once had a land program young woman from this almost unknown county). On completion of his novitiate he was sent for two years of philosophical study to St. Mary's Hall Stonyhurst, the philosophical seminary of the English province of the Jesuit Order. In 1904 at the end of his philosophy he went to Milltown Park, Dublin for his theology studies and was ordained a Jesuit priest by Archbishop Walsh in the chapel at Milltown Park in 1907. He said his first mass at the convent of the Irish Sisters of Charity, Mount St. Anne's, Milltown. 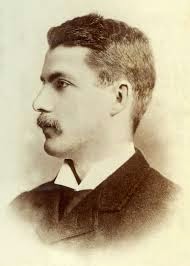 In February 1933 after suffering severe abdominal pains he was transferred from Clongowes to St. Vincent's Nursing Home in Lower Leeson St. Dublin. He died  on 19 February 1933, aged 71 with his brother Sir William Sullivan at his side. He was buried in Clongowes Wood Cemetery.

Father Sullivan’s priestly life was one of prayer, personal sacrifice, care for his students, and, most especially, concern for the ill and the poor. He spent hours in prayer on his knees before the Blessed Sacrament or in his room praying the Rosary. Many more hours were spent walking the roads of Ireland to pray for the sick, especially those with incurable illnesses. From the 1920s until his death in 1933, there were many instances of spiritual and physical healing through the mediation of his prayers.

While his cause for beatification and canonization is under consideration,  many who knew him already consider him a saint. Father Sullivan often blessed the sick using his vow crucifix; today the crucifix is kept in St. Francis Xavier’s Church, Gardiner Street, where it still used to bless the sick who seek Father Sullivan’s intercession. 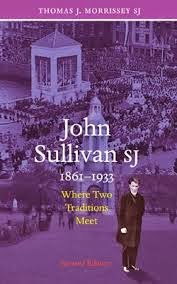 Posted by mother hildegard at 4:11 AM