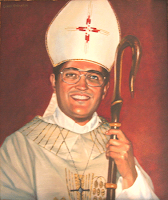 It is always a joy to find someone up for sainthood who lived in our lifetime and so close to home!
BISHOP ALPHONSE GALLEGOS (1931-1991), O.A.R., was a Roman Catholic bishop who was declared Venerable this week by Pope Francis. He was born in Albuquerque, New Mexico where his father was a carpenter, and his mother a homemaker caring for their 11 children. He had a twin brother, Eloy, grew up in Watts, and attended Manual Arts High School was confirmed by then auxiliary bishop Timothy Manning. 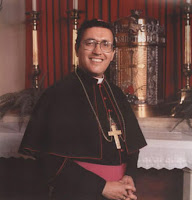 Venerable Alphonse attended Rockhurst University in Kansas City, graduated from St. Thomas Aquinas College in California (where several of our interns went to college)  and St. John's University in New York and Loyola Marymount University in Los Angeles. While a seminarian in Suffern, New York, his superiors learned that  Venerable Gallegos was born with a severe myopic condition. He had eye surgery prior to entering the seminary but wore "Coke bottle thick glasses and was nearly blind.

Venerable Alphonse was ordained for the Augustinian Recollects on May 24, 1958. From 1970 to 1979 he served as pastor of San Miguel and Cristo Rey parishes in the Los Angeles diocese. He was transferred to where he served from 1979 to 1981 as the first director of the Division of Hispanic Affairs of the California Catholic Conference.
On August 24, 1981, Pope John Paul II appointed Venerable Alphonses auxiliary bishop of the Roman Catholic Diocese of Sacramento, California as the titular bishop of Sasabe. He was ordained bishop on November 4, 1981 by Bishop Francis Quinn of , who confirmed me (he was the uncle of one of my classmates, thus came to Los Angeles to confirm us).

On Oct. 6, 1991, Venerable Alphonse died when he was struck by a car by the side of the road while returning to Sacramento from Gridley, California.  Because he was known as "the bishop of the barrio" approximately 300 lowrider cars drove in a procession before the bishop’s funeral Mass at the Cathedral of the Blessed Sacrament. The bishop was considered as an unofficial chaplain to lowriders and migrant workers..
He was a Knight and supporter of the unborn and in 1997, the city of erected a statue of the bishop and named the surrounding square area in his memory.

On March 25, 2010, his remains were transferred to the parish he resided in as an auxiliary bishop. This parish is the Sanctuary of the National Shrine of Our Lady of Guadalupe, to whom he had a great devotion. 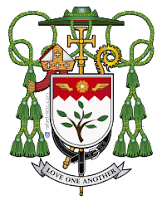 Posted by mother hildegard at 5:16 AM