NATIVITY ACROSS THE GLOBE 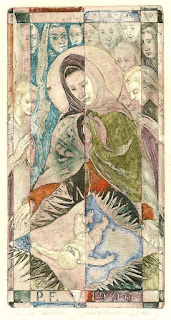 Culture is what holds us together, preserving language, thought patterns, ways of life, attitudes, and symbols. It  is celebrated in arts, music, drama, literature and life.  It constitutes a collective memory of the people, a collective heritage which will be handed down to generations to come. ( The World Council of Churches-Vancouver Conference in 1983)

One of my favorites is by the  Lithuanian artist Antanas Kmieliauskas (b. 1932), which shows people surrounding the Mother and newborn Child, most probably people he knew well.   I love the subtle, almost pastel colors. Antanas was a professor of Vilnius Academy of Arts, National Prize winner of , and one of the most comprehensive Lithuanian  painters of the 20th C.  He worked in many media from painting and sculpture to graphic art.

The bulk of his art, particularly the works of his religious art, has been undeservedly ignored over a long period of time. The artist's original creation based upon both fundamental classical and Modern European art traditions is a significant part of the fine arts of as well as of Lithuanian culture on the whole. 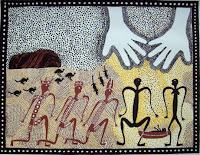 Greg is one of the most renown of Aboriginal painters. His work uses a kind of hatching and dot painting that is very common there and was traditionally painted onto skin for ceremonial reasons. The method itself is significant, as it reputedly withholds or encodes information in the dot patterns.

Greg’s Aboriginal heritage is Walbanga from the far south coast of , and his tribal totem is the shark. 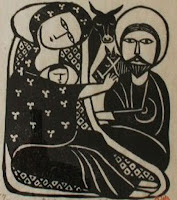 The Japanese artist Yo (Hiroshi) Iwashita (b. 1917)  was basically a stencil and wood block artist known for his rich textile patterns of a type of folk art, often using humor. I love how the Virgin Mary seems to have her hand on Joseph, as if acknowledging his protection of her and the Child.

Cesar Torrente Legaspi (1917-94) was a Filipino National Artist in painting. He was also an art director prior to going full-time in his visual art practice in the 1960s. A pioneer “Neo-Realist” he is remembered for his singular achievement of refining cubism in the Philippine context. Legaspi belonged to the so-called “Thirteen Moderns” and later, the “Neo-realists”.

His distinctive style and daring themes contributed significantly to the advent and eventual acceptance of modern art in the . He made use of the geometric fragmentation technique, weaving social comment and juxtaposing the mythical and modern into his overlapping, interacting forms with disturbing power and intensity.

Solomon Raj  from (b. 1921) uses batik and woodcuts, cheap materials that are readily available. He depicts Jesus amidst the refugees and suffering people.
Rooted in his love for the Gospel and his appreciation for his Indian heritage, he has spent a lifetime telling us to see and to believe. He is a master at intercultural communication taking stories buried in his heart of faith and openly sharing them through his unique creative vision.

He has written:  We know that the concept of culture is very complex indeed and it includes many things such as the community's language, its religion and ritual, its arts and crafts etc.  Culture is a  community's world view, of its hopes and fears, its expectations and shared values.  Culture is like a mass of computer data into which every individual of that community can draw from.  It is a community's collective memory and its stored heritage which every generation passes on to the next.
Posted by mother hildegard at 12:09 PM