MENTOR TO A MODERN SAINT


VENERABLE JAN TYRANOWSKI (1900-470) was a Catholic layman, student of Discalced Carmelite spirituality, and central figure in the spiritual formation of the young Karol Wojtyla, who became  (St.)Pope John Paul II. He was the youth leader and student mentor of Karol Wojtyla's university parish, St. Stanislaus Kostka, in the 1940s. He trained as an accountant, but.supported himself and his mother by working as a tailor.

He was a man with an extraordinary prayer life, devoting four hours every morning to meditation as well as other prayer periods through the day. Karol began attending weekly meetings which Jan entitled the Living Rosary. At these gatherings he introduced his new band of disciples to a brand of religion that was deeply mystical, and encouraged them to apply it to every area of their lives. He called them to a strict discipline and recommended that they keep a diary with a view to bringing God directly into every moment of their day.

Karol, initially, found the man almost unbearably intense, but gradually came to see something of profound import in Jan. Later in life Karol Wojtyla stated that "What he tried to teach us was new. He wanted to pull new listeners to this new life. Young people think they know everything … At the beginning they just couldn’t understand him – the truth about a … wholly internal life that was part of Jan and, for them, completely unknown.” 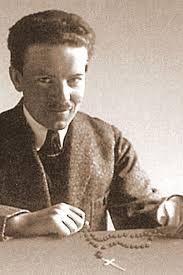 The young Karol Wojtyla was introduced to the writings of   St. John of the Cross who would come to be one of the great inspirations in the life of Karol. "From St. John he would learn that union with God requires a person to give up everything – everything they know as well as all that they own. Looking back he would feel that in Jan Tyranowski he had a living example of that quest for union with God before his very eyes.

Mieczyslaw Malinski, a friend of Karol’s and member of Jan 's group who later became a priest, was also skeptical at first about this religious eccentric, but eventually came to accept Jan's teaching. In later years Fr. Malinski stated that "Jan’s influence with Karol was gigantic. I can safely say that if it wasn’t for him neither Wojtyla nor I would have become priests.”

“This man was not a fiction or a symbol, but a real living person. It is worth noting that Jan’s demeanor, for example, the way he wore his watch, his expressions, all of the many details that reflect the social environment, were totally consistent with that environment. The entire difference was hidden within, and it was from within that all his external habits obtained their particular character. Jan guided his inner life according to the book "Mistyka" by Fr. Semenenko. Later, however, St. John of the Cross and St. Theresa of the Child Jesus became his chief spiritual masters. They were not only his masters, they led him to discover himself, they explained and justified his own life.

"Jan’s death was indeed a form of self-sacrifice. Jan approached it consciously; he wished it and prayed for it…"

Posted by mother hildegard at 9:42 AM