FRIEND OF A SAINT IN EL SALVADOR

SERVANT of GOD RUTILIO GRANDE GARCIA, SJ, was a Jesuit priest in El Salvador. He was assassinated in 1977, along with two other Salvadorans. Father Rutilio Grande was the first priest assassinated before the civil war started. He was a close friend of Bl. Archbishop Óscar  Romero. After his death, the Archbishop changed his conservative attitude toward the government and urged the government to investigate the murder.

Rutilio Grande was born  in 1928, the youngest of six children, to a poor family in . His parents divorced when he was young and he was raised by his older brother and grandmother, a devout and strong Catholic woman. At the age of 12 Rutilio was noticed by Archbishop Luis Chavez y Gonzalez during his annual visit to their village and was invited to attend the high school seminary in , the capital of the country.

At the age of 17, following the final year of high school seminary (minor seminary), Grande entered the Jesuit process of formation called the novitiate. Thus began a period of time outside of . Grande first traveled to , , since there was no Jesuit novitiate in .

Initially, Rutilio felt called to the missions of the Church in Asia. After two years in , he pronounced his vows and then traveled to to study the humanities, which he completed in 1950. The following three years were spent as a professor in a minor seminary in where he taught sacred history, history of the , the history of , and writing. 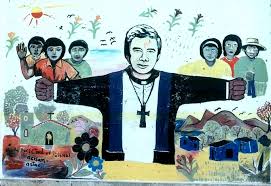 Rutilio was trained at the seminary of San José de la Montaña, where he became friends with Oscar Romero, a fellow student. Grande was ordained a priest in 1959, and went on to study abroad, mainly in . He returned to in 1965 and was appointed director of social action projects at the seminary in San Salvador, a position he held for nine years. From 1965 to 1970 he was also prefect of discipline and professor of pastoral theology in the diocesan seminary. Father Rutilio  was master of ceremonies at Father Romero’s installation as bishop of Santiago de María in 1975.

Father Grande returned to in 1962 to complete studies left undone due to his physical and mental struggles and in 1963 he finished a course of studies on Vatican II and the new directions in pastoral ministry at the Lumen Vitae Institute in . He was particularly influenced by his experiences of an inclusive liturgy which insisted upon the widest and deepest lay participation possible at that time. 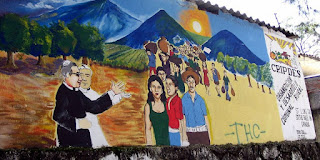 He served as prefect of theology from 1965 to 1966 in the major seminary. There he taught a variety of subject including liturgy, catechesis, pastoral theology, and introduction to the mystery of Christ (philosophy). He also fully utilized the social sciences in an effort to understand the reality within which he lived and ministered.

During this time, Father Rutilio  initiated a process of formation for seminarians which included pastoral “immersions” in the communities they would someday serve. This included time with people listening to their problems and their reality. He said, “the first contact with the people was to be characterized by a human encounter; to try to enter into their reality in order to leave with a common reality.”

This innovative aspect of formation lasted for a year or two, and then the Bishops asked that seminarians be sent back to their dioceses during their breaks so they could be supervised and relationships with the Bishop could be better established. Father Rutiloio Grande eventually had a falling out with the leadership of the seminary over his methods for formation and evangelization. He disagreed with the insistence that seminarians separate their intellectual formation from their pastoral formation. Grande wanted equilibrium between prayer, study and apostolic activity, and this equilibrium was not accepted by the traditional .

While deeply engaged in the lives of the people he served, he led with the Gospel but did not shy away from speaking on social and political issues, which had profound consequences for the Church. Father Rutilio could be credited with promoting a “pastoral” liberation ministry that began in scripture and allowed lay people in to work for social transformation without resorting to Marxism.

Father Grande challenged the government in its response to actions he saw as attempts to harass and silence Salvadoran priests.

He was prophetic on issues of land reform, the relationship of rich and poor, liturgical inclusiveness, workers’ rights and making the Catholic faith real for very poor people. He was fond of saying that “the Gospel must grow little feet” if Christ is not to remain in the clouds. He  was a friend and confidant of  Bl. Oscar Romero whom he inspired through his ministry, and the ultimate sacrifice he made. On March 12, 1977  Father Rutilio Grande was assassinated by the security forces of , just outside the village he was born in, suffering martyrdom for the people he served and loved.

Immediately, the news of these murders was transmitted to Archbishop Oscar A. Romero as well as to the Provincial of the Jesuits, who also resided in the capital. Three Jesuits from the Provincial office, Archbishop Romero, and his auxiliary Bishop Rivera y Damas all travelled to El Paisnal. At 7:00 PM President Arturo Molina called the Archbishop to offer his condolences and promise a thorough investigation.

At 10:30 PM that same evening, Archbishop Romero presided over the Mass, which lasted until midnight. The next morning, responding to a radio announcement by the Archbishop, streams of peasants began walking into El Paisnal for a 9:oo AM Memorial They came from near and far to mourn the death of their beloved priest and his friends. During the final funeral procession, one that would ultimately inter these bodies in the floor of the church in El Paisnal directly in front of the altar, the slogan could be heard: “Rutilio’s walk with El Paisnal is like Christ’s journey with the cross.

The Archbishop said: The true reason for Father Grande’s death was his prophetic and pastoral efforts to raise the consciousness of the people throughout his parish. Father Grande, without offending and forcing himself upon his flock in the practice of their religion, was only slowly forming a genuine community of faith, hope and love among them, he was making them aware of their dignity as individuals, of their basic rights as words, his was an effort toward comprehensive human development.

This post-Vatican Council ecclesiastical effort is certainly not agreeable to everyone, because it awakens the consciousness of the people. It is work that disturbs many; and to end it, it was necessary to liquidate its proponent. In our case, Father Rutilio Grande.
Posted by mother hildegard at 10:30 AM