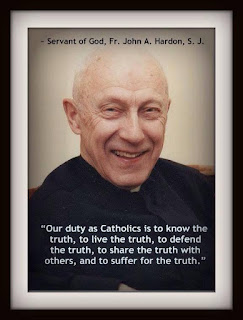 I am always looking for Jesuit saints to be and here is another American, one who had a great devotion to the Eucharist.
“The blessings we may expect are the blessings already proven by the lives of all the great saints who were devoted to the Holy Eucharist.”

SERVANT of GOD  JOHN HARDEN, SJ was born in 1914 to a devout Catholic family in Midland, Pennsylvania. When he was a year old, his 27-year-old father died in an industrial accident when the scaffolding collapsed under him as he moved to secure a steel beam dangling dangerously over his co-workers. After the accident John was raised by his 26-year-old mother Anna, who never remarried "out of concern for the influence a possible stepfather might have on her son's vocation." They moved to Cleveland, Ohio, where they lived "in the shadows of the iron and steel mills". Anna was a woman of deep faith, a Franciscan tertiary who embraced her poverty and her difficult circumstances with courage and grace, attending daily


Father John  was later to write: The most noticeable event of my childhood was my reception of First Holy Communion at the age of six. Sr. Benedicta, a member of the Sisters of Notre Dame who prepared us for our first Holy Communion, told us, “Whatever you ask Our Lord on your First Communion day, you will receive.” When I returned to my pew after Communion, I immediately asked our Lord, “Make me a priest.” I had only the faintest idea what I was saying, but I never forgot what sister had told us to do. When I was ordained twenty-six years later, my first sentiment was to thank Our Lord for hearing my prayers.

John received the sacrament of Confirmation at the age of eight, asking on this occasion for the Holy Spirit to give him “the grace of martyrdom.” As he commented in his Spiritual Autobiography about this mysterious grace:
Over the years, I should never forget the mysterious ways that our Lord has given me the privilege of professing my faith at no matter what price to my preference. Over the years, I have never tired telling people that Confirmation prepares them to live a martyr’s life, if it is God’s will to die a martyr’s death. 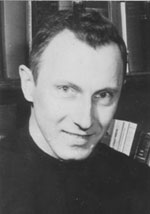 As John completed high school, the thought of a priestly vocation continued to grow. Unwilling to leave his widowed mother alone, however, he decided against the seminary directly after high school. With the help of savings his mother had put aside specifically for his future, he  enrolled in . He rode the streetcar to and from school each day, a distance of three to four hours daily. In his first two years at , John pursued studies in science, with the intention of becoming a medical doctor. However under the guidance of his priestly adviser, he began, in his third year of studies, to discern more clearly his own call to the priesthood. As he moved interiorly toward a priestly vocation, he changed his course of studies to include Latin, philosophy, and college theology. John was instinctively attracted to the religious life and  the academic rigor of the Society of Jesus, and their special fidelity to the Holy Father, attracted him to the Jesuits.
He later commented about his vocational decision, “Over the years since that decision, with God’s grace, I had never once doubted that what I was doing was consistent with the Divine Will. … A vocation to the priesthood is a special call from God that nothing, and I mean nothing, should raise a doubt whether to answer the call or not.”

During his formative years with the Jesuits, he obtained a Master’s degree in philosophy at in in 1941. He was ordained to the priesthood on June 18, 1947, his thirty-third birthday. Reflecting on the grace of his ordination and the pastoral mission which lay ahead, he wrote:
After being ordained to the priesthood in 1947, I still had several years of preparation for my final ministry. Unexpectedly, I was told that my vocation would be to prepare men to train priests. Never in my wildest dreams did I anticipate what this would mean. It would mean long preparation in understanding the Catholic faith, and I mean understanding the Catholic faith. Not only that, but the price that had to be paid in defending what had become the most trying century of Catholic Christianity.

After his ordination, Fr. Hardon was sent for two years of special doctoral studies in theology to the in . He was appointed director of the graduate library as well. He suffered greatly when asked by his superior to personally retrieve all of the heretical volumes which had been borrowed by graduate students.

“Before I had retrieved one-half of the heretical books, I had become the agent of orthodoxy and therefore the sworn enemy of the modernists, who were updating the Catholic faith to its modernist theology. I had doors slammed in my face. I lost friends whom I had considered believers. The lessons I learned were invaluable. … It taught me that the faith I had so casually learned could be preserved only by the price of a living martyrdom. This faith, I was to find out, is a precious treasure that cannot be preserved except at a heavy price. The price is nothing less than to confess what so many others either openly or covertly denied.”

In all of these years, Fr. Hardon never wavered in his orthodoxy and loyalty to the teaching of the Magisterium. As he noted about his teaching years in his Spiritual Autobiography:
All these years of remaining faithful to the Catholic Church in spite of widespread opposition to what I believed, these were the years when I learned clearly and deeply that to remain a bonafide Catholic teacher of Catholic Doctrine was, honestly,  the most demanding enterprise of my whole life.

Throughout his life, Fr. Hardon was a confessor and spiritual director, offering with tireless generosity to those who sought it.
Among the dozens of books authored by Fr. Hardon on the topics of religion and theology, his most defining works include his authorship of The Catholic Catechism (1975). This work stands as a significant contribution to Catholic orthodoxy, written at the request of His Holiness,  (Bl).Pope Paul VI, with whom Fr. Hardon had a close working relationship.  Fr. Hardon also served as a consultant for the drafting of the Catechism of the Catholic Church,  edited by Joseph Cardinal Ratzinger (later Pope Benedict XVI) and promulgated by His Holiness, Pope St. John Paul II in 1992.

Fr. John Hardon died  December 30, 2000 at the Columbiere Jesuit House in . Efforts are in progress for the creation of a permanent archive and study center on the life and work of Fr. Hardon at the Shrine of Our Lady of Guadalupe, in . The Archive and Guild is temporarily located in , and is a work for the cause of the beatification and canonization
of the Servant of God, Fr. John Anthony Hardon S.J.

A very saintly priest,  much of his mission seemed to be centered around promoting reverence towards the Blessed Sacrament, urging priests and lay people to establish Perpetual Adoration.


“Not only does our Lord in the Blessed Sacrament give us the courage to cope with our natural fears, He also gives us the ability to undertake great things for the sake of His name and the power to undergo great trials in our loyalty to His cause.

Posted by mother hildegard at 10:15 AM