ANOTHER SAINT OF THE EUCHARIST

SAINT GELTRUDE (CATERINA) COMENSOLI loved our Lord and worked tirelessly to draw others to find the peace and joy they found in His presence. 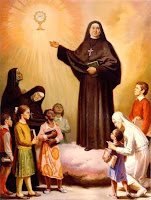 Caterina was born in 1847 the fifth  of ten children. She was playful, determined, and devout, demonstrating at an early age what God was calling her to do. By the age of seven, she yearned so deeply to receive our Lord in Holy Communion that she decided to do something about it. One morning she rose early, grabbed her mother’s black shawl and quietly left the house.  She walked to St. Mary’s Catholic Church for Mass. When it came time for Holy Communion, she approached the Communion rail and received her First Holy Communion.

Profoundly affected by the experience, she told of her feelings when questioned about her action. She described the “heavenly joy” of being united with Jesus and vowed her eternal love for Him. Caterina’s demeanor changed dramatically after this event as she became more prayerful and focusing her attention  on Jesus in the Blessed Sacrament.

Her true desire was to carry the Eucharist to the highest hill for all the world to see — to adore, to love, to know that Jesus is near to us and loves us. She also recognized that Jesus spent many hours alone in the tabernacle as on Holy Thursday night when the apostles could not stay awake. To address this situation, Caterina organized the Guard of Honor with the motto, “Jesus, loving You and making others love You".

At the age of  15, Caterina left her parents to join the Sisters of Charity in . Her piety, cheerfulness, and zeal led people to believe that she would do well in the convent. However, as has happened with so many saints, Caterina became ill and had to return home.

She eventually recovered, but soon had to leave home again since her parents needed help in supporting their family. Not forgetting the role of divine , Caterina accepted the need for her to become a domestic servant for two persons who would play important roles in her vocation.

First she worked forFr. G.B. Rota, the pastor of Chiari, then she worked for the Countess Fé-Vitali. Both of them recognized the uncommon holiness and zeal of Caterina and supported her desire to promote the Real Presence as she became more and more devoted to Jesus in the tabernacle.

On the Feast of Corpus Christi 1876, Caterina wrote down her rules for living and followed them faithfully for the rest of her life. Two years later, with her confessor’s permission, Caterina made a formal vow of chastity. This reaffirmed the vow she made when she received her First Holy Communion.

She continued fulfilling her responsibilities as a domestic servant and in her spare time she volunteered to catechize the children of San Gervasio, , while the Eucharist remained her primary love in life.

When the bishop of visited the Fé-Vitali home where Caterina was working, he gave her permission to establish an institute devoted to Eucharistic adoration. When she went to with the Fé- Vitalis in 1880, she met Pope Leo XIII.

Caterina quickly explained her desire to begin an institute for adoration of the Blessed Sacrament. He agreed to her proposal, but asked her to also include improving the plight of young female factory workers by educating them.

Having obtained the Pope’s approval, Caterina returned to and under the direction of the bishop and with the assistance of Fr. F. Spinelli, she and two of her friends established the Congregation of the Sacramentine Sisters of Bergamo on December 15, 1882.

Two years later the new order held its first community Hour of Eucharistic Adoration on December 15, 1884 at which time Caterina took the name Geltrude. The young women were soon tested when they had to leave their first home and the protective sponsorship of the bishop of because of financial difficulties. With confidence in God’s love, the nuns transferred to where Msgr. Rota joyfully welcomed them, providing them a home in Lavagna di Comazzo.

With patient perseverance  St. Geltrude overcame a number of challenges and after seven years, Fr. Rota, now bishop of , gave canonical recognition to the institute.. More women joined the new congregation which Mother Geltrude managed so well. Her life of prayer before Jesus nourished her life of virtue as she accepted persecutions, served the poor, and practiced mortifications. Above all she sought to obey and practice humility perfectly for love of Jesus Christ. She loved Jesus in adoration, but she also loved Him in the poor and needy.

By the turn of the century, the sisters thankfully announced that they could ensure that our Lord would be continuously adored in the Blessed Sacrament both in public and in private. 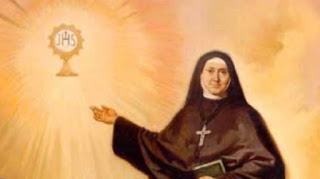 On February 18, 1903, at noon, Mother Geltrude bowed her head toward the chapel where our Lord was being adored, breathing her last.  Her remains lie in a special chapel in the house of the institute that she established in  is attached to the church where adoration is held.

Pope Benedict XVI canonized her on April 26, 2009 and her feast is celebrated on February 18.

Posted by mother hildegard at 11:25 AM