Another Hildegard dear to my heart for the work she is doing to promote quality art into our Catholic churches and homes, is HILDEGARD LETBETTER.

In a recent talk to patrons of the arts the Holy Father said: Throughout history, art has been second only to life in bearing witness to the Lord. It was, and remains, a majestic road allowing us more than by words and ideas to approach the faith, because it follows the same path of faith, that of beauty. The beauty of art enriches life and creates communion, because it unites God, man and creation in a single symphony. It connects the past, the present and the future, and it attracts – in the same place and with the same gaze – different and far-off peoples. 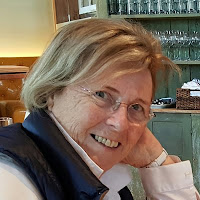 Hildegard grew up a child without enough to eat or drink in the aftermath of World War II in . Her family received care packages from the . Since she was a small child she dreamed of going to America where she was sure they had enough food.

Her older brothers later studied in the , staying with different households. A family from visited the Letbetters and offered to bring Hildegard to the , but her parents didn't have the means. The next month, a ticket from the family arrived in the mail. The year after, in 1964, she taught at in after getting an assistantship offer. She met her husband during that time, and after he served a stint in the Vietnam War, they relocated and she taught German at the .

In 1970-71, there was an economic downturn so she and her husband  went to and started over. In 1987,  she started her religious-gifts business in her home later opening on in  in the early '90s. 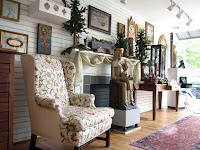 From the beginning Hildegard  wanted to start something special. “I went around, and I only saw items that didn't make you feel good about your faith, or were kitschy, as we say in .” Next time she went to , she made connections, offering to sell items from Maria Laach Abbey. They sold fast, and during the next trip, Hildegard visited other places with items she could bring to the Today, her store sells art from other countries such as , , , and . Hildegard has run Creator Mundi for 30 years now. It is a place where someone can not only buy religious art, but can learn about the artists from around the world creating it.  Hildegard makes sure her staff are well educated in the arts!

Hildegard says she is not an artist herself but has “an eye” for it. She studied theology in and grew up inspired by experiences she had in the Cologne Cathedral around the time of World War II.

Through the years, she's seen change in how people interpret both religion and the art that comes from it. “Today, it's not about the theology,  but how people live together and how you fashion your life in the spirit of Jesus.”

While holding dearly to our Catholic heritage, roots and traditions, Hildegard sees her missions as reaching out ecumenically. 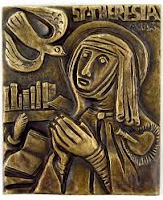 “My hope and prayer for you is that you find your own treasure among our ever-growing and changing collection of distinctive, religious sacred art and gifts. Distinctive sacred art that is artistically beautiful, culturally authentic and biblically based, creating lasting heirlooms for your family. May our pieces stir and awaken your mind and your soul.

Hildegard  visited us soon after we built our new chapel 21 years ago and was so impressed by the simplicity and beauty that she made it possible for us to obtain our stations of the cross from Maria Laach Abbey. She herself donated the 15th station (The Resurrection), which hangs next to the Tabernacle.

Over the years I have done a Blog and used the art of Egino Weinert to illustrate other Blogs. He is one of Hildegard’s favorite artists.

"In today’s troubled world, unfortunately so often torn and damaged by selfishness and the thirst for power, art represents, perhaps even more than in the past, a universal need because it is a source of harmony and peace, and it expresses the dimension of generosity." (Pope Francis)

Posted by mother hildegard at 10:06 AM