“Priests have no choice. The psychological pressure from the world, the flesh and the devil is too strong to cope with by themselves. The Holy Eucharist must remain, if it already is, or become, if it is not, the mainstay of their priestly lives. This is no option. It is a law of spiritual survival in every age, and with thunderous emphasis, for Catholic priests in our day. 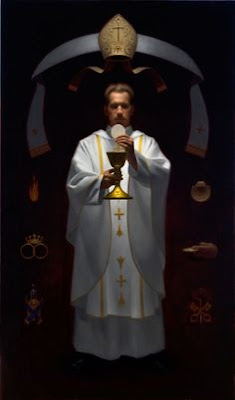 No doubt the Eucharistic faith and devotion of priests are crucially important in the priestly apostolate. “Like priest, like people” is a truism of the Church’s history. But “like Eucharist, like priest” is also a sobering fact of the Church’s biography.

Priests are as selfless and chaste, as sacrificing and humble, as their lives are centered on the Eucharist. The daily and devout offering of Mass, the daily Holy Hour and frequent Benediction, the frequent visits to the Blessed Sacrament – these are not superficial priestly devotions. They are expressions of a profound love for Jesus Christ, now living and offering Himself for our sanctification on earth on our way to eternity...

I make bold to say that the single most important need for Catholic priests is a renewed faith in the Holy Eucharist…  Would anyone doubt that in our nation in the last decade of the twentieth century, we need an avalanche of moral miracles to protect the priesthood and the priestly apostolate from the demonic forces let loose in our country today?

Only God can work a miracle, and we need to change the figure - an ocean of miracles in America, and in Canada, as in England, France, Germany, and Scandinavia, to mention just a few materially wealthy countries that are in desperate need of divine grace where so many are walking in darkness and the shadow of eternal death.
Jesus Christ is the infinite God Who became man. He became man not only to die for us on . He became man to live with us in the Holy Eucharist.

His divine power is accessible in the Holy Eucharist to those, beginning with priests, who have the humility to believe.
Father John Harden, SJ

Posted by mother hildegard at 9:54 AM