These days I find it hard to even read Catholic news due to the way Bishops, priests and religious are addressed.  In my days of writing, there were standards of respect.  I have in the past done a Blog on women being called “guys” (Blog 8/26/15) . Interestingly enough, young women today do not like to be called ”ladies”  but they have no problem with guys”?  Are we just not thinking straight? 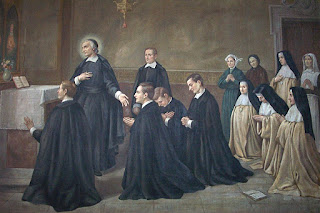 I recently read an article on Bishop Robert Barron (see previous Blog)  and the writer (from the Catholic News Agency) kept referring to him as Barron. So getting off my soapbox, I decided to do a little research.

According to  Marian Therese Horvat, Ph.D.
“the tumultuous and leveling aftermath of Vatican II spelled a death to formalities in the religious sphere. Priests, monks and sisters began to adopt the ways of a world that were becoming increasingly vulgar and egalitarian. Distinguishing titles and marks of respect were considered alienating and only for old-fashioned “establishment” people who were afraid to embrace the “signs of the times.”

Protocal  states:
When writing about a Bishop he should be referred to as  His Excellency, The Right Reverend Robert Barron, Bishop of .

A priest should be addressed with his full name: The Reverend  Father James Smith or Father James Smith.  If he is a religious the initials of his order are added, as S.J.  for a Jesuit.  Would you greet Father after Mass ad say “good morning Smith”?

A religious woman should be addressed Sister Benedict Jones, OSB. or in the case of an enclosed nun often the title Mother is used, hence Mother Hildegard George, OSB.

I am making it my mission to write to some of the so-called Catholic news people and give them some hints regarding proper Catholic writing! Perhaps if we begin to have more respect for those who represent Christ to us, there will be an increase in respect for all in our society!

Posted by mother hildegard at 10:33 AM