SAINTS AND MAD WOMEN  (AND BIRDS)

We all have difficult days...blue days.... days when we want to be alone...

My study of  SAINTS & BIRDS continues and amazing saints are found- among a favorite is ST. CHRISTINA the ASTONISHING. She was born in Belgium in 1150. It is known that she worked as a shepherdess, growing closer to God over the years. Due to the fact that she did not take care of her body she died. Some say she had a seizure and was not really dead. At her funeral Mass after the Agnus Dei, she flew up out of her coffin like a bird and perched herself in the rafters of the church. After the Mass the priest told her to come down. She reported that she had been to Hell, recognizing many people there. She was then shown Purgatory, and recognizing many more. She was taken to Heaven where she was offered the choice of remaining with God, or returning to earth so that she could offer herself for the salvation of others. She chose the unselfish course.

Her life is one astonishing event after another; she climbed trees to perch on the branches with the birds (note painting). She exhibited both unusual traits and abilities. For example, she could not stand the odor of  some people because she could smell the sin in them, and would climb trees or buildings, hide in ovens or cupboards, or simply levitate to avoid contact. Many thought she was possessed by devils, and tried to capture her, but she always managed to escape. Making penances for the souls of Purgatory and Hell was the aim in her life. People who knew her were divided in their opinions: she was a holy woman, touched by God or she was suffering the torments of devils – or she was flatly insane. The prioress of Saint Catherine’s convent testified that no matter how bizarre or excessive Christina’s reported actions, she was always completely obedient to the orders of the prioresses of the convent. Christina was a friend of Louis, Count of Looz, whose castle she visited, and whose actions she rebuked. The  mystic Saint Lutgardis sought her advice. Christina died in 1224 at Saint Catherine’s convent of natural causes, aged 74. 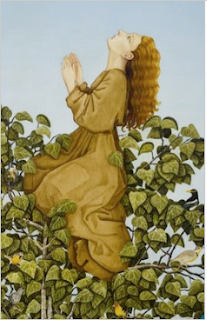 She is the patroness against insanity, mental disorders, psychiatrists, therapists, and mental health professionals.   So on those blue days I glance at this painting, which sits by my desk and laugh- wishing I could join the birds in a tree!
Posted by mother hildegard at 12:04 PM 1 comment: