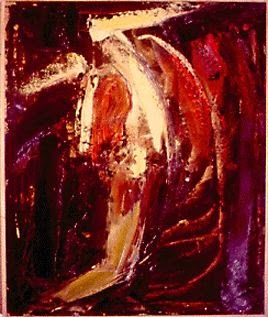 Our artist for Holy Week has given us the most number of crucifixions. WILLIAM CONGDON, born in Providence, Rhode Island in 1912 was an American painter who gained notoriety as an artist in New York City in the 1940s, but lived most of his life in Europe, dying in Milan in 1998.

He lived a  profoundly personal and Christian life after his conversion to Catholicism in 1959.  After living for a year in Venice, he took up permanent residence in Assisi where he lived for the next 19 years. In 1979, though not a monk, he moved permanently to a studio apartment attached to a new Benedictine community in the monastery of Saints Peter and Paul  outside of a small village near Milan. For the last 19 years of his life the lowlands of the Milanese countryside were the major inspiration of his art. Many felt this move was "suicide" to his art!

His own words from his journals speak more than all the critics about the man and his work.
"I know I won't sleep any more .. I am slowly sinking into the depths of original nothingness until at a certain point I recognize that I am smiling and smiling with the smile of another of the Face of the Other who is these pastels who is their naked rigorousness of nothingness that from the Cross  explodes in the shout of all who is this miracle that creates the universe, that re-creates me and from the depths of the anguish of original nothingness I feel myself float up and up again-- and I sleep." (Manuscript, April 18, 1989.) 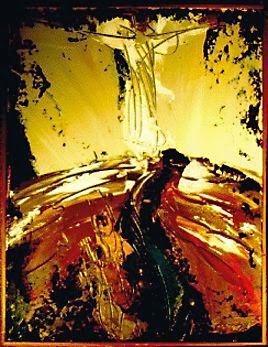 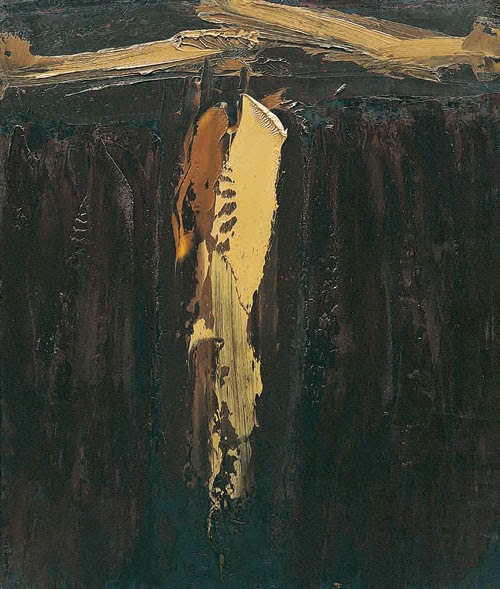 During the late 1950s Congdon's life was often in a state of agony. Having early in life been deprived of a close relationship to his family and his roots in New England, and his search around the globe for a surrogate had failed. He writes about the "destructive projection of his ego" and also of feelings of self-doubt and sin in his disordered life. In 1951 in Assisi he had met Don Giovanni Rossi, the founder of the association Pro Civitate Christiana, who had welcomed him with affection and who held out hope.

In the Sahara Desert in 1955 a French waiter quite fortuitously gave Congdon a copy of the Confessions of St. Augustine, a book that took on increasing significance for the artist in his solitude. Perhaps it was St. Augustine's conviction that he who searches for God has already found God within himself, which helped the artist in his determination to alter the direction of his life.

He returned to Assisi, converted to Catholicism, and was baptized in August 1959. He was received by the lay movement Pro Civitate Christiana and moved into an old, small house in Assisi, where he began his long cycle of religious paintings. He now no longer painted in isolation,  but felt able to relate his work to a larger community. 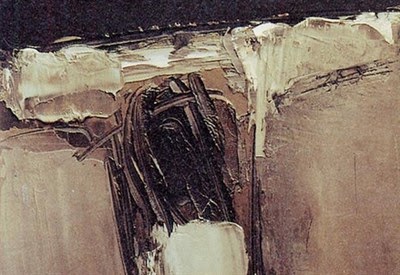 "I felt the weight of Christ on my pictures, on my very creative freedom. In those years few pictures came to birth, and they would not have come to birth -I lament-if I always had to think of Christ when I painted. When I heard that the Blessed Angelico painted with a brush in one hand and the Gospel in the other, it struck me as the most absurd nonsense. One of the greatest difficulties for the artist who offers himself to conversion is letting Christ settle in. The autonomy of art is an inviolable, untouchable mystery that, like the Spirit, "blows where and when it wills." "A collision of two mysteries," a friend said to me. One mystery the artist had already within himself. God has given it to him, and the artist will only permit God, with difficulty, to take it from him in order to have the artist accept another mystery that he neither sees nor touches, even if this latter mystery promises to recover and to regenerate the first mystery which was lost." 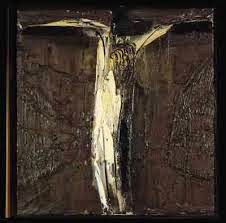 "After my baptism in the Catholic Church at Assisi in 1959, the figure again became explicit in the form and content of the Cross. However, it is perhaps inevitable that the encounter with Christ and the discovery that his drama of the Cross is also my own- I mean for our salvation - should lead me to the Crucifix through a return to the figure." 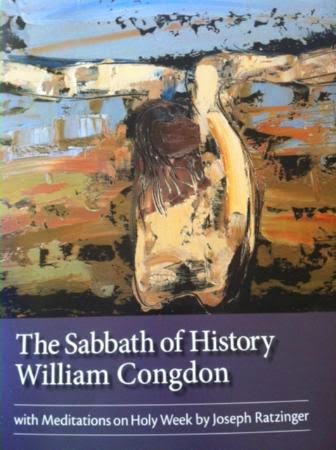 Posted by mother hildegard at 9:57 AM No comments: 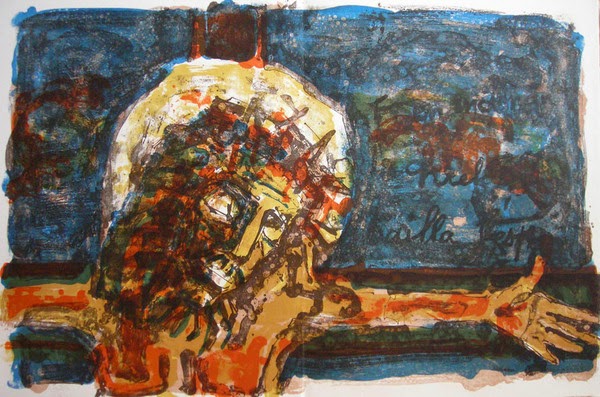 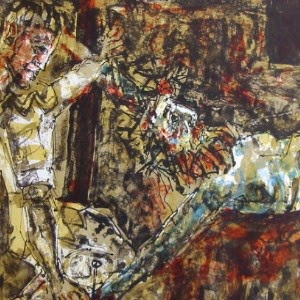 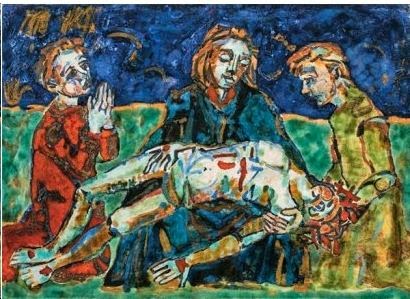 Posted by mother hildegard at 6:47 PM No comments: 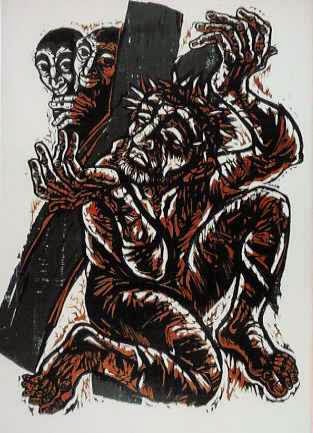 Posted by mother hildegard at 8:52 AM No comments: 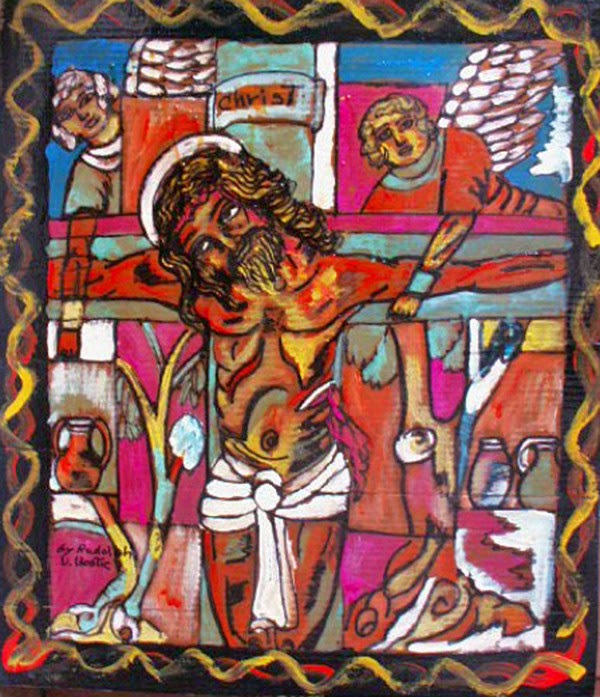 Our next artist for Lent, the only one not to suffer through a world war, is RUDOLPH VALENTINO BOSTIC. He was born in Savannah, GA in 1941. Rudy Bostic is a self-taught artist known for his vibrantly rendered religious images, usually done in magic marker, acrylic, metallic, and enamel house paint on cardboard, with the occasional flourish of glitter to accent his work.

As a young boy, Rudy had few toys and resorted to making his own.  At the age of 17, he was asked to draw some religious paintings to be displayed in the church. Further encouragement came from his uncle, the longtime pastor of the Second African Baptist Church on Green Square in Savannah, who asked Rudy and his brother to make religious pictures for his congregation.

Rudy was working at the Derst Baking Company in Savannah in 1979 when he was inspired to use their discarded cardboard boxes as canvases. When he ran his fingers along its smooth, solid surface, he thought it would make an ideal "canvas" for working with all the odds and ends of house paint he had at home. He worked into the early hours of each morning making his first pictures on cardboard panels laid out on his bed. His working style hasn't changed much over the years, but he has since expanded his color palette and his images have branched out to include heroes of history and myth, fantasy landscapes, and everything from angels and hot air balloons, to mermaids and merry-go-rounds.

“Growing up like most children, I believe we all had our dream world... I loved 'Cowboys and Indians,' which became my introduction to drawing. As I grew older, I lost interest in art until I reached high school. In my later years, I took a closer view of art and realized that few artists today capture the power and the glory of God the way the old masters did. Trying to find a way, I studied their works. I love the design, colors and subjects of the Renaissance artists and the way Rembrandt uses dark and light. Inspired by their work, I try to express my love for God and the world.” 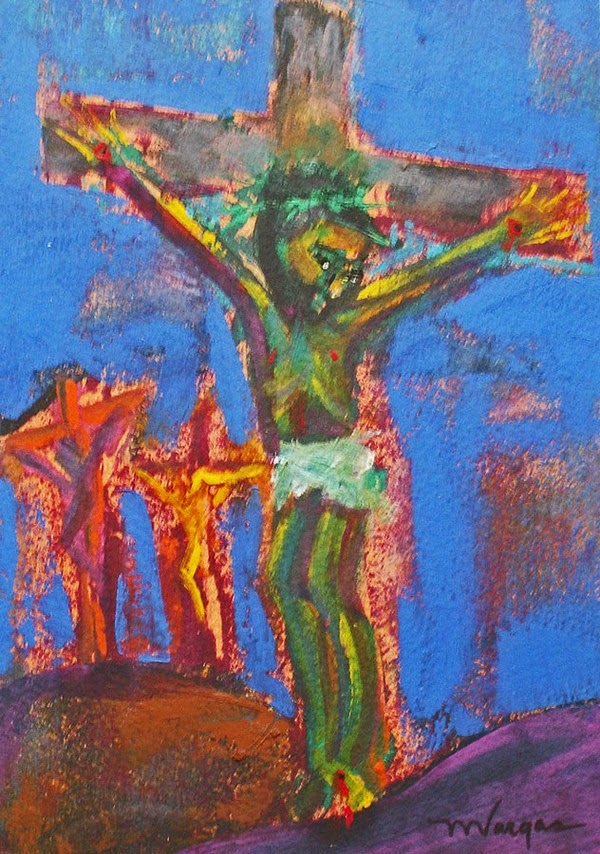 Rudy Bostic belongs to the category of "self-taught" artists. He is deeply religious and his favorite subjects are scenes from the bible.  Occasionally, he branches out into something he has seen on television; circus animals, cowboys, and Paris or Venice.  He has great enthusiasm for his art and loves to share his vision with others.

Rudy is gaining recognition as a talented self-taught artist and is included in the collection of The Mennello Museum of American Folk Art, in Orlando, Florida.

This creator in cardboard is a true visionary artist. He seldom works from preparatory sketches and almost never retouches finished pictures, which are usually made in one sitting with the cardboard panel, lying in front of him on his bed. With his imagination so steeped in biblical imagery, Rudy gathers his paint pots and brushes, picks up a cardboard panel, and, as he says, "the images just come to me."

While his paintings are firmly rooted in an Afro-American tradition of “testimony art," meant to share Black historical experiences and religious beliefs, there is something that reminds us of Eastern Orthodox icons.

"The Crucifixion I" is an excellent example of his style of double painting. Clustered around Christ on the cross, one sees visual references to Jesus as “Lamb of God” and “Lion of Judah,” the Eucharistic symbols of bread and wine, an open Bible - even the Ark of the Covenant.


Posted by mother hildegard at 9:36 AM No comments: