Recently I found this quote (source unknown) which certainly rings true of the many saints I have found in the past months in my study of "Saints and Birds"!

"the saints have not fallen from Heaven.
they are people like us, who also have complicated problems.
holiness does not consist in never having erred or sinned.
holiness increases the capacity for conversion,
for repentance, for willingness to start again
and, especially,  for reconciliation and forgiveness".

What has been particularly note worthy is the number of holy people Blessed Pope John Paul II called to the front during his pontificate. Almost every country is now represented and there are more non-religious (and non Italians) then ever. Africa, Asia and N & S America are represented as never before. Over the weeks I hope to introduce some of the lesser known but interesting personages. Their life story gives us hope that our own road to the Father may also be paved with special graces.

Before I went to Costa Rica in November I encountered their only saint- at least one recognized as such- and asked her to guide me in my trip. People there were amazed that I knew of her (and a few did not know of her). She is BLESSED MARIA ROMERO MENESES. She died in 1977and was beatified by Pope John Paul II in 2002. She was born in Granada, Nicaragua, in 1902 to a wealthy family; her father was a government minister. At the age of 12, she was extremely sick and paralyzed for six months with rheumatic fever. She was cured by the intercession and apparition of Our Lady Help of Christians, during which she understood her vocation to be a Salesian sister. She  made her final profession in 1929. 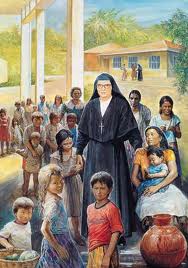 Two years later, she was transferred to San Jose, Costa Rica where she taught music, drawing and typing to rich girls. She also trained catechists and trades to the poor. She inspired many of her students to join her in her work with the poor and was known for helping people come to know God in a personal way. More and more, her ministry became focused on social development, helping the rich to see how they could help the poor. She set up recreational centers, food distribution centers, a school for poor girls, and a clinic staffed by volunteer doctors.


In 1973, she organized the construction of seven homes, which became the foundation of the village Centro San Jose, a community where poor families could have decent homes. When her health began to fail she returned to Nicaragua for rest but died there in 1977.


Because she had spent her life working in Costa Rica she was returned there for burial. Blessed María always joined love and devotion to the Eucharist and Mary with her social apostolate. Her body rests in the Salesian chapel at San José, Costa Rica.
Posted by mother hildegard at 10:52 AM 1 comment:

December 17 is the day for the Christmas Bird Count in our area of the country. This count, which takes place all over North America and into Central & South America, is over 100 years old yet many have not heard about it. Around the turn of the 20th C. scientists and bird watchers were becoming concerned about declining bird populations due to the winter tradition known as the Christmas "Side Hunt". People would choose sides and go afield with their guns. Whichever side brought in the biggest pile of birds won.

Christmas Day 1900, ornithologist Frank Chapman, of the Audubon Society, proposed a new holiday tradition: A "Christmas Bird Census" that would count birds in the holidays rather than hunt them. Most of the counts were in the eastern part of the US & Canada, though there was one each in California, Colorado & Missouri. Twenty seven people participated finding a total of 89 species.

We have come along way in 111 years!  Today, there are tens of thousands volunteering for the count and over 57 million birds sited in the US alone ( 646 species). For the past 9 years, I have taken my 4-H birding club to scour the island for water birds, small brown birds hiding in the thickets, raptors high above us, and everything in between. Our goal is to find at least 60 species, which usually puts us in the top 10 count for the State of Washington. In February, we will follow up this count with the "Backyard Bird Count" and in May with the "Migration Count". Bird watching, at least in the NW, is now the # one family "sport".

Having just returned from Costa Rica, a country with some of the most beautiful birds in the Western Hemisphere, I am grateful that our children learn at an early age an appreciation for God's feathered creatures. In CR  while the people appreciate all who flock to see their birds, they themselves are not that involved in bird watching and in Peru (which I visited 2 years ago- and has the highest # of bird species in the world) even less so.

Anyone can participate in this annual activity. If you are new to birding, join others more able to identify the local species. All of us can make a difference, and at this time of year when we have so much to be thankful for, we can thank Mr. Chapman for alerting us to more positive ways of protecting our "feathered friends".
Posted by mother hildegard at 8:13 PM 1 comment: