UPDATE on CROWS and CHILDREN PROJECT 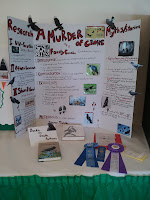 May 29 I did a blog on the MURDER of CROWS study my 4-H birding group did for the Country Fair.

I am happy to announce that they not only got a blue ribbon but also Grand Champion AND  Best of Show!


Interesting to note that two of the authors writing about crows, whose books we read, are in Seattle.

We will now send the study to the Professor at Univ. of Washington who did the famous study of crows as seen in the PBS film. He can come and study our crows anytime as they feed with the pigs!

Posted by mother hildegard at 3:34 PM No comments:

Some summers are harder than others...this seems to be one of those busy, hectic times- yes,  in a monastery on a quiet island!  We have had an unusually cool summer with the exception of a few days last week- when temps here reached 82.

The rest of the country was scorching hot and islanders complain when it reaches 80. We so often in these hot days use the term "dog days" of summer, but what do we really mean?

The name comes from the ancient belief that Sirius (the Dog Star) in proximity to the sun was responsible for the hot weather. These dog days of summer are most commonly experienced  from mid July  to mid August.

In the summer, Sirius, the “dog star,” rises and sets with the sun. During late July Sirius is in conjunction with the sun, and the ancients believed that its heat added to the heat of the sun, giving us the hot weather.

They also believed these days to be an evil time when the sea boiled, the wine turned sour, dogs grew mad, all other creatures became languid, and diseases, burning fevers, hysterics occurred in humans.  For us modern mortals, these long hot days are the time when tempers are short, nights can be sleepless and energy is on the low side.

People often comment how peaceful it seems in a monastery and sometimes (when my temper is short) I will reply:  try living with a bunch of women. The analogy I have used is being in the same boat (the monastery), rowing in the same direction (which is towards Christ) but sometimes our oars get a bit off rhythm, causing a temporary loss of balance.

As in any dynamic relationship, nuns (and monks) at times come into conflict with one another. Guests may see us as perfect, holy, peaceful, etc. but we know better!  Being in that boat together we practice our vow of "Conversatio" or Conversion of  Life, DAILY.  Like any good marriage, if  we did not work on relationship, trying to work in rhythm, the boat would sink, taking us with it.
Posted by mother hildegard at 1:52 PM No comments: