A ROYAL SAINT - BOOKS WORTH READING 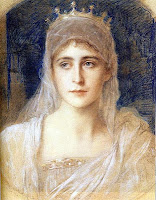 Considered to have been the most beautiful princess in Europe, ELIZABETH of HESSE and by Rhine, or ‘Ella’ as she was known, was a  granddaughter of Queen Victoria and the daughter of Princess Alice of Great Britain and Grand Duke Louis of Hesse. Born in 1864, her privileged, happy  childhood was touched by tragedy by the death of her young mother. Close to Queen Victoria, Ella spent some of her happiest times in Britain.


At 20, much against the wishes of her  grandmother, who despised everything Russian, Ella became engaged to Grand Duke Serge Alexandrovich, the authoritarian younger brother of Tsar Alexander III. It was at their wedding that her younger sister, Alix, formed a love match with the future Tsar Nicholas II; an event which not only  sealed the fate of both sisters, but that of the Imperial House of Romanov. But for these two marriages, the history of Russia might have been very different.

With the assassination of her husband, Ella renounced society and, against considerable opposition, founded the first religious Order of its kind in Russia, working for the poor and destitute of Moscow. Though loved for her charitable works and pioneering achievements, Ella, like Nicholas, Alexandra, and fourteen members of their family, met a brutal death at the hands of the Bolsheviks.

In 1909, she sold off her magnificent collection of jewels and other luxurious possessions; even her wedding ring was not spared. With the proceeds she founded her order. She soon opened a hospital, a chapel, a pharmacy and an orphanage on its grounds. Elizabeth and her nuns worked tirelessly among the poor and the sick of Moscow. She often visited Moscow’s worst slums and did all she could to help alleviate the suffering of the poor.

She could have fled and saved herself on many occasions, but rather chose to live her life serving the people. At the height of the Russian Revolution ( 1918), she was taken captive to Siberia where, having been clubbed with rifle butts, she was hurled alive into a disused mineshaft and left to die of her injuries with another nun. Later retrieved, her incorrupt body was eventually laid to rest on the Mount of Olives. She was subsequently canonized by the Russian Orthodox Church as the Holy Imperial Martyr Saint Elisabeth Romanova.

If you're a true history buff  then I would recommend Christopher Warwick's Ella: Princess, Saint and Martyr. Not for the faint of heart, as it is full of specific details and accounts of events often taken directly from the family's personal letters at the time. It paints a vivid picture of what life was like in the family of Queen Victoria and of her children and her grandchildren, and the life of Elisabeth (Ella) in Russia before and just after the Bolshevik Revolution. Much has been written about the frivolous and aloof  Russian royalty, but in Ella's case, nothing could have been farther from the truth.

My only problem with the book was its slow beginning as I tried to figure out who was who. Queen Victoria's children and grandchildren married into every royal house in the western world.  A chart detailing the family relationships would have helped in identifying some of the  family members mentioned.

She is one of the ten 20th-century martyrs from across the world who are depicted in statues above the Great West Door of  Westminster Abbey, London, England.
Posted by mother hildegard at 9:58 AM