My community teases me about my "obsession" with birding. I like to call it one of my many passions. One has only to see the very funny movie: THE BIG YEAR to get the point. (The book is even better).  A wonderful read is LIFE LIST: A Woman's Quest for the World's Most Amazing Birds by Olivia Gentile. One does not have to be a birder, or even like birds, to follow the travels of this amazing, yet perhaps tragic, woman.

After her four kids were nearly grown and she was about to turn 50, PHOEBE SNETSINGER
was told she had less than a year to live. A St. Louis housewife and avid backyard birder, she decided to spend that year traveling the world in search of birds. As it turned out, her doctors were wrong, but Phoebe's passion had been lit and she spent the next eighteen years crisscrossing the globe in search of new birds. She contracted malaria in Zambia, nearly fell to her death in Zaire, and was kidnapped and attacked on the outskirts of Port Moresby. Yet none of this curbed her enthusiasm. By the time she died in a bus accident while birding in Madagascar in 1999, Phoebe was world renowned and had seen more species, 8,500 of the roughly 10,000, than anyone in history.

To give you some perspective on just what an fantastic accomplishment seeing 8,000 birds is, consider this:
Only 300 or so people have ever hit the 5,000 mark. Only 100 people have made it to 6,000 and only 12 or so have seen more than 7,000. In addition to money, serious birding requires time and strict adherence to the rules. There are birders who've been blacklisted for cheating and others that have fought over what actually constitutes a sighting (some birders say if you "hear" a bird, you've seen it.) Experts say that such numbers today are almost impossible, given the difficulty of fast travel after 9/11.

As an amateur ornithologist, Phoebe took copious field notes, especially regarding distinctive subspecies, many of which have since been reclassified as full species. For her, the birds were the goal, to be savored and appreciated; not the number on a list. Through exhaustive study, she knew the birds before she left on a trip and she cataloged everything. Experienced guides would say of her that when she was along, it was like having an extra leader. Unlike some of those who boast of high bird lists, she was absolutely scrupulous as to her identifications. She would not count the bird unless she was certain.  She was also generous to a fault, sharing her knowledge with anyone she encountered on her many trips.

"Except for one thing, this book would rate as a great adventure novel and fictional psychological portrait, about a woman's obsession with bird-watching, its effect on her relationships with her husband and her four children, and the horrifying mishaps that she survived on each continent--until the last mishap. But the book isn't that great novel, because instead it's a great true story: the biography of Phoebe Snetsinger, who set the world record for bird species seen, after growing up in an era when American women weren't supposed to be competitive or have careers. Whether or not you pretend that it's a novel, you'll enjoy this powerful, moving story."—Jared Diamond, Pulitzer-Prize-winning author 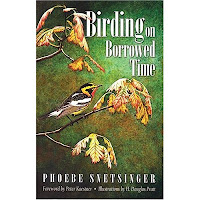 I was envious of Phoebe's adventures and the many birds she saw (my life list is almost to 1300), but at times I found myself thinking this is one of the saddest stories I have ever read. Like Phoebe, I am passionate about birds and I like to do my "homework" before I hit  new  fields, and love sharing my finds, but unlike her, birding is not an obsession which consumes me.

Phoebe also wrote a book  which was published after she died: Birding on Borrowed Time.