What is it about the election of a new Pope that has the world watching?  No other spiritual leader garners such attention. While Catholics seem to be reviled, criticized, and sometimes made fun of, the world, nevertheless, seems spellbound by the Church.

The smoke was white!  As we watched, waiting, for the announcement of our new Pope, I gazed in awe at the TV in front of us, wondering how many thousands had managed to crowd into the square at St. Peter's, and how many, like my Community, were glued to their TVs. Every major TV network around the world was plugged into this event and when the Pope was announced the commentator had information on the man and his background already at hand.

When we later watched the Installation of the Holy Father and His first Mass, I was awe struck by how many different languages came into play.  Interest in the papal election extends beyond the confines of the Catholic Church in the weeks leading to the conclave. For many people of faith who are not Catholic, the transition from Pope Benedict to a new leader is worth watching because many times what the leader of the Catholic Church says affects all Christians. 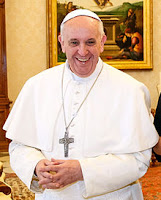 The direction the new pope takes his flock is of great importance for committed Catholics, but the papacy is also closely watched by other faiths. The pope wields vast influence as the world's most powerful moral leader.  A few weeks after the installation of the Holy Father, "our" Mormons were here for their annual work on the land with us.  Their bishop commented on how we share so much in terms of morality and ideals.

The leadership and voice of the Catholic Church in the person of the pope on issues of peace and economic justice is very important. For the Christian church as a whole, Catholic social teaching is one of the most coherent bodies of  thought on the role of the church in the world," said Duane Shank, an Anabaptist who is senior policy adviser at Sojourners, a Washington-based Christian organization committed to faith in action for social justice.

The Catholic Church "is an unbroken link to the first-century Roman church for all Christians, no matter our denomination. ... No matter if we are Eastern or Western Christians, no matter how Protestant or Anabaptist some of us are, the church of Rome is still in some way our mother church...People are very hopeful about the future at these times of transitions", said Shank"

People are hopeful that Pope Francis will not only build on the legacy of Pope Benedict, of peace building around the world, but that certain divisions can be bridged between people of different races and religions, something certainly needed not only in other nations but especially our own. 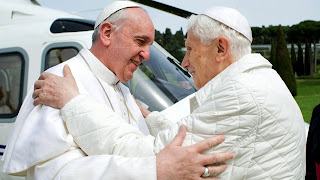 The Rev. Miguel De La Torre, a Southern Baptist minister and professor of social ethics at Iliff School of  Theology in Denver, watched events unfold after Pope Benedict's resignation from the perspective of a Cuban-American who was raised Catholic. He said the words of a pope are watched worldwide and influences the actions of bishops and priests as well. 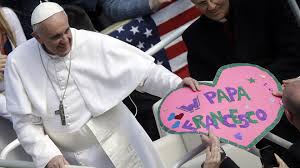 The first days of Pope Francis have given us tantalizing tidbits of anecdotes that whet our appetite for more. He took the bus back to the hotel with his fellow cardinals rather than going in an available limousine. He packed his own bags and paid his own hotel bill. We know of the stories of his refusal to live in the bishops' residence in Buenos Aires, Argentina, as cardinal, and how he cooked his own meals and used public transportation. For the present he has chosen to live in simplicity rather than in the papal apartments. The very choice of Francis for the papal name illustrates a devotion to the poor and social justice. These are actions the world finds appealing. He is also a man of deep prayer, which we contemplatives find even more appealing.

Posted by mother hildegard at 6:16 PM