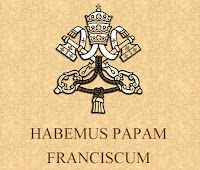 Episcopal and papal coats of arms have a long history in the Church, dating back to the Middle Ages. From the Vatican’s website:

There is an at least 800-year-old tradition for Popes to have their own personal coat of arms, in addition to  the symbols proper to the Apostolic See. Particularly during the Renaissance and the centuries that followed, it was customary to mark with the arms of the reigning Supreme Pontiff all his principal works. Indeed, Papal coats of arms appear on buildings and in various publications, decrees and documents.

Popes often used their family shield or composed their own with symbols indicating their ideal of life or referring to past events or experiences, or even elements connected with specific Pontifical programs. At times, they even added a variant to a shield that they had adopted on becoming a Bishop. 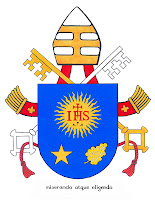 In his spirit of poverty and humility, our Holy Father Pope Francis has chosen to use the coat of arms which he used as Archbishop of Buenos Aires, with the addition of the papal symbols of a bishops' miter and gold and silver-crossed keys.


The shield has a bright blue background, at the center top of which is a yellow radiant sun with the IHS Christogram on it representing Jesus (IHS are the first three letters in Greek for the name of Jesus and also the Jesuit logo).

The IHS monogram, as well as a cross that pierces the H, are in red with three black nails directly under them. Under that, to the left, is a gold star representing the Virgin Mary, Mother of Christ and the Church. To the right of the star is a nard flower ( following blog on this) representing St. Joseph, Patron of the Universal Church. With these symbols the Pope demonstrates his love for the Holy Family.

Below the seal is Pope Francis’s motto, the same motto he chose as a bishop: “Miserando atque eligendo.” Meaning “lowly but chosen,” the motto is translated from Latin as “because he saw him through the eyes of mercy and chose him” and references the story of Jesus choosing the tax collector, Matthew, as one of his apostles.

St. Bede the Venerable  first used this motto in his homily about the calling of St. Matthew by Jesus, focusing on divine mercy. Jesus saw the tax collector, Matthew, sitting at a customs post and said to him, “Follow me.” St. Bede explained, “Jesus saw Matthew, not merely in the usual sense, but more significantly with his merciful understanding of men.”

This homily has taken on special significance in the Pope's life and spiritual journey. It was on the Feast of St. Matthew in 1953 that a young, seventeen-year-old Jorge Bergoglio was touched by the mercy of God and felt the call to religious life in the footsteps of Saint Ignatius of Loyola.

He is now known as the humble pontiff with a practical approach to poverty. His coat of arms shows us this in its "reuse", simplicity and in his love for the Holy Family as well as dedication to all families!.

Posted by mother hildegard at 9:58 AM