Today we celebrate the feast of St. Augustin Zhao Rong and 119 Chinese Martyrs, who were canonized by Bl. Pope John Paul in 2000.  They were part of the hidden Christian church which, even to this day, is persecuted in parts of Asia. These saints were martyred between 1648  and 1930.  St. Augustin himself died in 1815. He was one of 29 priests (including six bishops) martyred for their faith. Their witness to the Christian faith, ties in with the last blog regarding religious freedom for all peoples.

Of late I have been fascinated by the Christian art that comes from Asia- You have seen many of the paintings and drawing of Sadao Watanabe and Dr. He Qi in past blogs.  I came across a book that deals with five of these artists, one who I will present here.

Although the artists represented share one medium, they tell their stories very differently, depending on visual forms, signs, symbols, and features that appeal to their particular cultures. 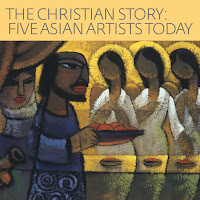 While they may not be well known in their native lands, these artists are known throughout the world in other places, esp. by discerning patrons of the arts, and their work is featured in museums in many countries.

These  contemporary Asian artists are all Christians, working as members of a minority religious tradition on a continent where Buddhism, Hinduism and Islam command the largest share of loyalty. This has not stopped these artists from producing biblically inspired art that expresses deeply held religious beliefs.

SAWAI  CHINNAWONG of Payap University, Chiang Mai, Thailand, is well known in Asia for his portrayals of Biblical imagery in a traditional Thai graphic idiom. After completing his art studies, he attended the McGilvary Faculty of Theology at Payap University in Chiang Mai, Thailand. He was the Paul T. Lauby artist in residence at the Overseas Ministries Study Center in 2003-2004, and was one of five artists featured in the 2007 exhibition, "The Christian Story: Five Asian Artists Today" at the Museum of Biblical Art (MOBIA) in New York City.

"My work represents influences from many styles...I believe Jesus Christ is present in every culture, and I have chosen to celebrate his presence in our lives through Thai traditional cultural forms".

"My belief is that Jesus did not choose just one people to hear his Word, but chose to make his home in every human heart. And just as his Word may be spoken in every language, so the visual message can be shared in the beauty of the many styles of artistry around the world."

Sawai said the goal of his art was to “bring Christianity into his own culture.” All biblical characters are portrayed as native people of Thailand. Their clothes are traditional of Thailand, as are the plants and foods that are present in each scene.

He portrays Christianity and Thai culture in harmony. In the caption under one painting he writes, “Buddha is never seen suffering in our iconography, but as a Christian I have to depict the suffering of Christ, which is the hardest spiritual concept for us to understand or accept. Christ is not a Westerner, however. He is Thai.”

The love for art  began when he was he child while he watched old men painting on a Buddhist temple wall. His interest in art persisted into adulthood. He studied art in a vocational school in Bangkok, Thailand. It was at this time that Sawai became a Christian. He says that a missionary was witnessing on the street one day, and soon after he began to study the Bible every day after art class.

After completing his art studies, Sawai studied at the McGilvary Faculty of Theology at Payap University in Chiang Mai. He was deeply influenced by a series of lectures on the history of Christian Art given there in 1984 by artist and professor Nalini Jayasuriya. He began creating liturgical art while attending seminary and designed the artwork for the chapel there. Today his art is appreciated in many places for its portrayal of Christian themes through a Thai graphic idiom that is inspired by Thai culture. He was the Paul T. Lauby artist in residence at the Overseas Ministries Study Center in New Haven, USA, in 2003-2004. and was one of five artists featured in the 2007 exhibition "The Christian Story: Five Asian Artists. 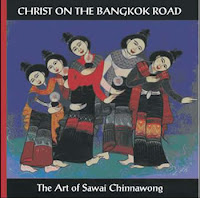 Posted by mother hildegard at 11:01 AM