ST. BENEDICT with OTHER SAINTS

While doing recent blogs on St. Benedict I was amused to see how Catholic art has changed through the ages. In earlier art, rarely was St Benedict alone, but usually surrounded by other saints, especially founders of the great orders, like Sts. Francis and Dominic.

St. Benedict of Nursia lived in the sixth century, and in spite of his many followers, no contemporary painted his portrait, and, we have no specific description of his features. While there was really nothing from his era, we do have the famous frescoes of Subiaco, which were painted in the 13th century by Master Conxolus, of the Roman school. This painter contributed nearly all the frescoes in the Lower Church.

As with most early medieval figures, it has fallen to later artists and their imaginations to provide us with images of St Benedict. He is almost always depicted as gentle, wise and fatherly and many of the paintings show him surrounding the Virgin Mary, with other saints.  A beautiful example is Fra Angelico’s "Coronation of the Virgin" (1436) which is found in the Convento of San Marco, in Florence. We see St. Benedict ( 2nd on left)  with St Thomas to his left and Sts Dominic, Francis, Peter, and  Mark to the right.  (see above)

One of my favorites, and where St. Benedict is alone in his adoration, is "Adoration of the Child with St. Benedict and Angels" (1478) by Vincenzo Foppa. Note the wonderful sheep on the hill in the background.

Bernardino di Betto Pinturicchio (c.1452-1513) painted Sts. Benedict and Gregory the Great together with the Virgin in Glory.

Another interesting painting is "Madonna and Child with St. Anne
and the Sts. Sebastian, Peter, Benedict and Philip" (1529) by Jacopo da Pontormo.  One wonders  who chose which saints the painter would mount onto his canvas.  Was it patron saints of the one who commissioned the painting? We must remember that in these eras, the artist one did not usually paint what he wanted, but rather what he was commissioned to paint.  I would venture to guess that many were commissioned by the great Benedictine Abbeys of Italy.

Pictured with another great Benedictine of a later era is "Christ in Glory with St. Benedict with St. Romuald" by Domenico Ghirlandaio (1492).

"Madonna with  Sts. John the Baptist, Gregory the Great, and Benedict" by Andrea Mantega, which was actually begun in 1492, but finished in 1506, is from the same years.

Note that all the above paintings are of the same era, and all from great Italian artists.  There is not a lot in between the 15th Century and the present age showing our saint with other saints- other than his twin sister Scholastica..

In our modern times, since St. Benedict has been named one of the patrons of Europe, we have some lovely examples of our him with other great saints of the Church. The beautiful painting by John Armstrong (England) of "Our Lady Protecting Europe",  illustrates the Christian roots of Europe, and shows Our Lady surrounded by the six patron saints of Europe: Sts. Cyril and Methodius, St Teresa Benedicta of the Cross (Edith Stein), St Benedict, St Bridget of Sweden, and St Catherine of Siena. Robert Schumann, one of the founding fathers of the European Union, looks on. St Benedict offers the monastery of Canterbury to the Blessed Virgin and St Cyril writes of the conversion of the Slavs. 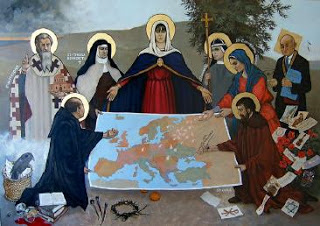 Another modern icon shows again the patrons of Europe. St. Benedict on the left with Sts. Cyril & Methodius, Bridget, Catherine and Teresa Benedicta.

Posted by mother hildegard at 9:58 AM