VATICAN UPDATE: PEACE IN THE CHURCH & THE WORLD 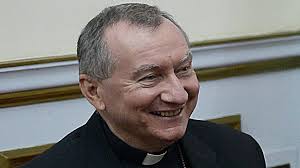 Pope Francis yesterday appointed a senior Vatican diplomat as his new Secretary of State, to replace Cardinal Tarcisio Bertone. The Secretary of State is considered the top political and diplomatic position in the Vatican and in some instances he can stand in for the pope.

His replacement for the "number two" position at the Vatican, is Italian ARCHBISHOP PIETRO PAROLIN. He is currently the Catholic Church's envoy to Venezuela.

At 58, Archbishop Parolin is seen as relatively youthful for a top Vatican office. Some think he could help a process of renewal within the church, as well as making it more influential in the modern world.

"I feel the full weight of the responsibility placed upon me: this call entrusts to me a difficult and challenging mission," the Archbishop said in a statement.

Ordained in 1980, he was previously a Vatican envoy to Mexico, where he fought to gain legal recognition for the Catholic Church. His first foreign posting for the Vatican was in Nigeria where he became familiar with the problems in Christian-Muslim relations . He has worked on sensitive issues for the Church, including diplomatic relations with Israel and improving ties with communist China.  In 2009, he was appointed papal nuncio to Caracas.  He speaks Italian, English, French, and Spanish


"I feel very strongly the grace of this call, which is yet another and the latest of God's surprises in my life," Archbishop Parolin said in a statement quoted by Vatican Radio.


Pope Francis on Sunday condemned the use of chemical weapons, calling for a negotiated settlement of the civil war in Syria.  He announced he would lead a worldwide day of fasting and prayer for peace there on September 7.

Speaking with anguish he said: "My heart is deeply wounded by what is happening in Syria and anguished by the dramatic developments... With utmost firmness, I condemn the use of chemical weapons. I tell you that those terrible images from recent days are burned into my mind and heart".

Pope Francis reiterated previous appeals for all sides in the civil war to put down their arms and "listen to the voice of their conscience and with courage take up the way of negotiations."

With tens of thousands of people in the square applauding his words, the Holy Father delivered his strongest remarks yet to express his horror at the use of chemical weapons.

He wants people on both sides of the conflict to put down their weapons and “listen to the voice of their conscience and with courage take up the way of negotiations.”

During their August 29 meeting,  Pope Francis and King Abdullah of Jordan reaffirmed that dialogue among all Syrians, with international support: “is the only option to put an end to the conflict and to the violence that every day causes the loss of so many human lives, especially amongst the helpless civilian population.”

Pope Francis invited other Christians, members of other religions, and all "people of goodwill" to join the Catholic initiative in any way they see fit.

Posted by mother hildegard at 11:07 AM