IT DOESN'T GET ANY BETTER! LOCAL MUSIC- FROM AROUND THE WORLD 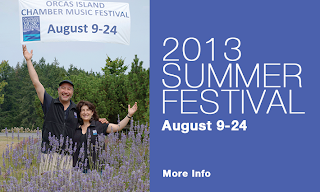 This past week we again ventured over to our neighboring island for the annual Orcas Chamber Music Festival.  The OICMF  attracts very gifted and well-known musicians from around the world.


The Festival has grown to include a two-week summer concert series, a vital chamber music education program for preschools, K-12, and community musicians, plus an in-depth lecture series. Orcas Island's 5,000 residents plus other islanders and visitors fill the theater to capacity. Every concert is sold out and tickets must be gotten in Spring to ensure you get the program you want


The Festival, established in 1998, is an award winning and nationally recognized gathering of world-class musicians, and as the title suggests- it don't get any better..

Aloysia Friedmann, the Founder and Artistic Director, plays violin (made in 1695 in Milan by Grancino) and viola (also a Grancino). She is married to the world- reknown Jon (Jackie) Kimura Parker. Her father Martin Friedmann was for years first chair at the Seattle Symphony.  Her mother Laila Storch, played oboe.  They have been friends with our resident musician Mother Felicitas, for years. Aloysia and Jackie live in Houston and have a daughter, Sophie, who just started high school. The Friedmann family has had property on Orcas since the early '50s.


Jon (Jackie) Kimura Parker, is an Internationally acclaimed concert pianist, born, raised, and educated in Vancouver. A true Canadian ambassador of music, Jackie has given two command performances for Queen Elizabeth II, and has performed for the Prime Ministers of Canada and Japan, and for the United States Supreme Court. A remarkably versatile artist, he plays anything as long as it has keys!  He recently toured the Canadian Arctic as part of “Piano Six” performing the music of Beethoven, Chopin, Nirvana, and Alanis Morissette on an electronic keyboard for over 1,000 Inuit school students. On top of being extremely talented he is very down to earth and has a fab sense of humor.

While every year is the best, it just seems to get better and this year maybe topped all the years.  The theme was "Czech Mate". Most of the music was Dvorak which was glorious. The last movement of his "Miniatures for two violins and viola", was restrained eloquence.  The strings of our hearts were touched! This music inspires us and encourages us to be better in what we do in our lives. It is a taste of heaven!

THANKS ALOYSIA AND JACKIE  FOR ENRICHING THE LIVES OF SO MANY!