THE POPE TO END HUNGER

Much has been made of our new Holy Father Francis and his love of the poor of this world.  He chose the name “Francis,” in honor of the saint who gave up his wealth to live among the poor. The Holy Father has shown a concern for the poor and disenfranchised, spending time among them, blessing and kissing the needy and disabled.  In June Pope Francis got a lot more specific, calling on the United Nations’ Food and Agriculture Organization to end the global food crisis.

“It is a well-known fact that current levels of production are sufficient, yet millions of people are still suffering and dying of starvation...This is truly scandalous. A way has to be found to enable everyone to benefit from the fruits of the earth, and not simply to close the gap between the affluent and those who must be satisfied with the crumbs falling from the table.”

Specifically, Pope Francis laid out what he called “financial speculation” that treats food like any other commodity and affects its global price, as well as the tendency to “look the other way” when presented with troubling needs like hunger. Everyone, he said, should have access to nutritious food.

When world hunger is spoken of so often Africa or parts of Asia come to our minds, but we forget the many thousands in our own country who do not have proper diets. Anyone who has lived in a big USA city or visited in the inner city has seen people searching for food in the dumpsters. New laws in our country ban markets and restaurants from giving away excess food which used to be donated to the needy, especially through food kitchens. Instead the food is dumped or burned.

Earlier the Holy Father attacked food waste in a speech in St. Peter’s Square on the United Nations’ World Environmental Day. “Once our grandparents were very careful not to throw away any leftover food. Consumerism has led us to become used to an excess and daily waste of food, to which at times we are no longer able to give a just value. Throwing away food is like stealing from the table of the poor and the hungry".

The Pope’s statements on food will come as no surprise to most Catholics. The Church has formed  positions in recent years on issues surrounding food, and the humanitarian group Catholic Relief Services (CRS) believes that Catholics’ “commitment to the value of each human life should be reflected in both individual choices and in the policies and structures of society.” CRS’s principles emphasize the value of every human life, focusing on community-based solutions and small-scale farms; a special preference for the poor and vulnerable; workers’ rights; solidarity across national borders; and environmental sustainability.

Catholic Social Teaching and Food
The dignity of every human life is the foundation for Catholic social teaching (CST). The right to life for all persons, based on their identity as precious children of God, means that all people have basic rights to those things that are necessary for them to live and thrive, including the right to food. Our commitment to the value of each human life should be reflected in both individual choices and in the policies and structures of society. The bishops of the United States have reflected on CST, agriculture, and food in For I Was Hungry & You Gave Me Food and other statements, summarized below:  Here I will list only the first three:

Protecting Human Life and Dignity.
Every person has a right to life and to the material and spiritual support required to live a truly human existence.The right to life includes the right to food and nutrition to sustain life and to enable a person to develop in dignity. The poverty and hunger that diminish the lives of millions in our own land and in many other countries are threats to human life and dignity and demand a response from believers.

The Call to Family, Community and Participation.
The human person is not only sacred but also social, living society impacts human dignity and the ability of persons to live in vibrant and healthy communities. Policies that favor larger scale farm operations can lead to a loss of economic viability for smaller scale family farms and the depopulation of rural communities. Hunger impacts families everywhere by interfering with children's ability to learn and develop and often forcing parents to sacrifice essentials, such as access to health care or children's education, in order to provide sufficient food for their families. Hunger and poverty in developing countries leads to increased immigration and family separation. Catholic social teaching urges that the voices of people suffering from hunger and smaller scale rural farmers and ranchers should be present in decision-making regarding policies that affect them.

Option for and with the Poor and Vulnerable.
We maintain a special concern for poor and vulnerable people, including those who are hungry here and abroad. The primary goal for food and agricultural policies should be access to food for all people and reducing poverty among the most vulnerable everywhere. Trade practices with poorer countries should be fair and should promote the dignity and welfare of farmers in those countries. Important moral measures of the global food and agricultural system are how their weakest participants are treated and whether the system provides access to basic nutrition for all.

Everyone can make a difference, no matter how small it may seem to us, it can be huge for another. There are many organizations out there that feed the poor.  Find one and start your donating. It can be only a matter of a few dollars a month. Some families we know have a small meal once a week and the money they saved on a larger meal (usually with meat) goes to help others. Our Community is especially fond of Heifer International which donates animals and educates peoples in Third World countries.  Giving food is one issue, but education is key in ending crises in our world:  not only education of the poor, but of politicians and the wealthy. Jeff Bridge's efforts in no kids hungry.org.  had brought the plight of the children in our own country to the awareness of many. 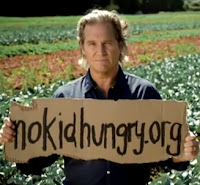