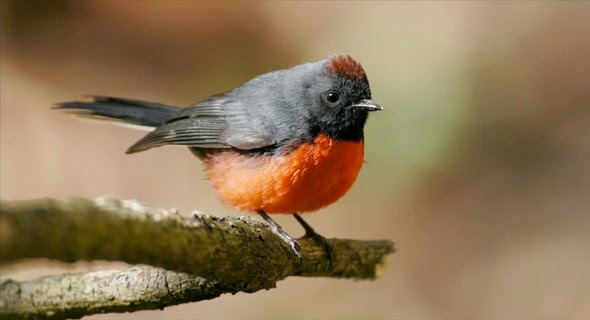 As I had written in a blog before Holy Week, I was off to SE Arizona with two of our Oblates.  Southeast Arizona has some of the top birding spots in the world and on this trip we visited five. The convergence of four distinct bioregions-the Sonoran and Chihuahuan deserts, and the Sierra Madre and the Rocky Mountains-provides a prime mix of habitats for more than 400 species of birds.

It was a wonderful trip, in which I added 35 birds to my life list. My goal on this trip was 25-30 new species so  I exceeded that goal. There were many highlights but perhaps the most exciting was the spotting of a SLATE THROATED REDSTART in the Chiricahua Mts. (8500+ ft).  This bird has been sighted in the USA only a handful of times, so was immediately reported to the Arizona Birding Assoc. for inclusion in the listing.  A few hours later as we descended the mountain we saw cars, racing to the top, perhaps to get a glimpse of our bird. Seeing reports the next day, it seems our lovely had flown to another area as it has not been seen since.

I flew from Seattle to Tucson where I had a layover awaiting Martha and MaryAnne to fetch me the next day to begin our journey to Madera Canyon- a magnificent area in the mountains only about 1 1/2 hours SE of Tucson.  We were fortunate to hook up with "The Desert Harrier", one of the best guides I have ever had.  He took us on a 4 hour walk though amazing but gentle country. I saw 15 new birds there alone.

At our cabin we were graced with some new hummingbirds (Broad -billed and Magnificent), painted redstarts and many acorn woodpeckers. Being a bit tired from the morning, we toured the area by car, stopping at the base of the Florida Canyon.  I was determined to find some scaled quail, so tried to imitate them by calling (more of a dying scream I am sure).  Soon overhead soared a GREY HAWK (one of the birds we missed in Texas last year). We were sure it was looking for whatever was on its last breath, as it flew low and slow.


Not five minutes later, MaryAnne (the non-birder among us) cried: what is that yellow bird in the tree? Behold, another bird missed in Texas, the glorious  HOODED ORIOLE.

After 3 too short days we drove south to Patagonia (birding again at the Patton Place) and then north and south again to the San Pedro River Valley, where we were treated like royalty for 3 days and nights.  Each day we drove into other valleys, and while not as many birds as in the other areas, some were gems: Violet -crowned hummers and Cordilleran flycatchers.

We then drove east to Portal located at 5400 feet elevation in the heart of the Chiricahua Mountains, where we had 5 days with a Road Scholar group. We added to our list the shy NORTHERN PYGMY OWL and the world's lightest owl, the ELF OWL, which weighs in at 1.4 Oz. We saw them nightly outside our lodge (as well as javelinas, sometimes as many as a dozen).

On that high mountain we saw several very colorful warblers:  RED-FACED  and the OLIVE (which looks more like a pumpkin than an olive!).  The BLUE-THROATED HUMMINGBIRD was daily at our deck feeders and later, several flycatchers were added to the list: the DUSKY-CAPPED and the BUFF-BREASTED.

Our last day we spent at the Amado Territory Inn (another treat) and birded Buenas Aires Wildlife Refuge which comprises 118,000 acres of protected grasslands, streams, and cienegas (marshlands or wetlands) for threatened and endangered species. And, with over 300 species sighted, it is, one of Arizona’s premier birding areas. Here we tried to find the rare five-stripped sparrow (spotted that day by someone) but unfortunately we came across a water- filled hole too deep for us to cross in the car so only went a bit further by foot. We  left Arizona just as the temperature was rising (not normal for April) but happy with the many treasure we found in desert and mountains.

Posted by mother hildegard at 8:04 AM