I am sometimes asked, due to my love of art, if I  am an artist- to which I reply only in my mind! When I was in college many years ago, in a rigorous pre-med program, I found myself weekly, if not more often in the local art museum, a small but real gem with a fabulous library.  If I had spent as much time on chemistry and physics as I did perusing art tomes, I might be a doctor today.  My father was an artist, who rarely got time to do anything really creative- he was also a mathematical genius, so am not sure how the two went hand in hand. He studied architecture but did not put that gift into practice into later in his life.

Self-taught, she painted in the naive’ or ‘modern primitive’ style, inspired by her religious faith and and love of nature. The intensity of her images, both in her magical colors and in repeating designs, are sometimes interpreted as a reflection of her own psyche, walking a tightrope between ecstasy and mental illness.

Both her parents died when she was a small child so she was raised by an older sister.  She first worked as a shepherdess but, by 1881, she was engaged as a domestic worker at the convent of the Sisters of Providence in Oise. Beginning in 1901, she was employed as a housekeeper for middle-class families in the town of Senlis.


She painted by candlelight, largely in secret isolation, until her considerable body of work was discovered in 1912 by German art collector Wilhelm Uhde, whose house she cleaned. He was amazed by her talent but his support had barely begun when he was forced to leave France in 1914 due to the war.

They  reestablished contact in 1927 when Uhde, back in France and living in Chantilly, visited an exhibition of local artists in Senlis and, seeing Séraphine's work, realized that she had survived and her art had flourished. Under his patronage, she began painting large canvases, gaining  prominence as the naïve painter of her day. In 1929, Uhde organized an exhibition, "Painters of the Sacred Heart," that featured Séraphine's art, launching her into a period of financial success she had never known. Then, in 1930, with the effects of the Great Depression destroying the finances of her patrons, Uhde had no choice but to stop buying her paintings. 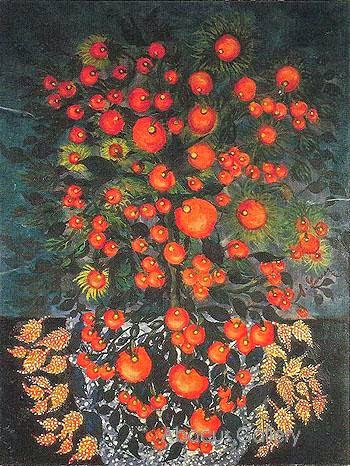 In 1932, Séraphine  was admitted for "chronic psychosis" at Clermont's insane asylum, where her artistry found no outlet. She died friendless and alone and  was buried in a common grave.

Séraphine Louis's works are often rich fantasies of intensely repeated and embellished floral arrangements. She used colors and pigments that she made herself from unusual and exotic ingredients she never revealed, but which have stood the test of time for durable vividness.

In 2009, the film Séraphine by director Martin Provost won seven César Awards, including Best Film and Best Actress for Yolande Moreau who starred in the title role.

I am most grateful to be introduced to this remarkable woman, who never let any hardship stand in the way of her passion. A lesson for us all! In her simplicity she saw her Lord in nature and in her own heart.


Posted by mother hildegard at 8:56 PM