WOMEN WHO BRING THE SAINTS ALIVE


Every genuine artistic intuition goes beyond what the senses perceive and, reaching beneath reality's surface, strives to interpret its hidden mystery. The intuition itself springs from the depths of the human soul, where the desire to give meaning to one's own life is joined by the fleeting vision of beauty and of the mysterious unity of things. All artists experience the unbridgeable gap which lies between the work of their hands, however successful it may be, and the dazzling perfection of the beauty glimpsed in the ardour of the creative moment: what they manage to express in their painting, their sculpting, their creating is no more than a glimmer of the splendour which flared for a moment before the eyes of their spirit.   (St. John Paul Letter to Artists, 1999)


In my search for Catholic women artists in the USA, I found very few  21 C. sculptors that I would like to introduce. I am sure there are more out there but….  here are two favorites.

SONDRA JONSON has been a professional sculptor since 1985, and has produced and installed over 25 life-size monuments in seven states. Her small works have been exhibited and collected throughout the U.S., and in Italy. Her collectors include the White House and the Vatican.

A convert from Judaism, and a life-long artist, Sondra has acquired a keen insight into the relationship between art and the Church. Although her sculpture installations include many in public parks and buildings, it is her liturgical art that she considers the highlight of her career. 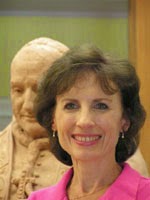 She says that her Catholic identity is inseparable from her craft.  She entered the Church in 1982, after growing up in a secular Jewish family, the daughter of two doctors.

Today, she sees her purpose as a Catholic artist as one of teaching and inspiring, like the great Catholic painters and sculptors of old: “We liturgical artists hope to inspire those who encounter our work with a sense of the mystery and truth of Christ.”

Her style which is both classical and contemporary, powerful yet tender, leaves us with a powerful message. And like the sculptors of old, one feels one can touch her pieces and they jump to life.

Interestingly enough, both of these woman artists have strong, poignant works of Rachel weeping for her children.

Our other Catholic sculptor is SARAH HEMPEL IRANI, a figurative artist, specializing in liturgical, memorial, and portrait sculpture. She has spent countless hours in the studio working with live models, pouring over anatomy books and copying old Master drawings in order to gain a keen understanding of the human form. She is passionate about integrating the arts into her local community and inspiring people to engage their creativity.

Sarah  is a classically trained sculptor, working in clay, plaster, bronze and marble. In 2000, she graduated from Hillsdale College, Michigan.  After graduation, she moved to Maryland in order to work as an apprentice to Jay Hall Carpenter, former Artist-in-Residence at the Washington National Cathedral. In 2001, she established Hempel Studios in Frederick, Maryland.

At only twenty-five years of age, Sarah was awarded a commission to create two larger-than-life sized marble sculptures of Saint Joseph and the Virgin Annunciate for Our Lady of Mercy Catholic Church. To give an idea of what a woman goes through to create massive pieces of art I quote: I Sarah articulated each of the sculptures full-scale in clay and had the plaster casts carved in Carrara marble by a crew of talented stone carvers. The Virgin Mary was carved in Virginia by former carver at the Washington National Cathedral, Malcolm Harlow. Saint Joseph was carved in Pietrasanta, Italy at Studio Antognazzi. Each of the sculptures weighed over two tons!"  For her work in sculpture, Sarah was awarded a Maryland Arts Council Individual Artist Award in 2009.

In November 2010, a half-life-size sculpture entitled, “A Voice in Ramah,” was awarded third prize at the Third Annual Catholic Arts Exhibition, at St. Vincent's College, Latrobe, Pennsylvania, by Sister Wendy Beckett. In January, 2011, she graduated with a Master’s of Arts in Humanities, with a concentration in Medieval and Renaissance Studies, from Hood College Graduate School in Frederick, Maryland.

Sarah moved to Northwestern Pennsylvania in 2009, where she lives in a little yellow cottage with her husband and their daughter.


"Art is always a spiritual act, but with sacred art, people approach it seeking God. And there is that hope that the piece you made, carefully, painstakingly, lovingly with your own hands, somehow connects the viewer to something, Someone Higher."  SHI

Posted by mother hildegard at 4:31 PM