My hope for all of you who are artists is that you will have an especially intense experience of creative inspiration. May the beauty which you pass on to generations still to come be such that it will stir them to wonder! Faced with the sacredness of life and of the human person, and before the marvels of the universe, wonder is the only appropriate attitude... People of today and tomorrow need this enthusiasm if they are to meet and master the crucial challenges which stand before us. Thanks to this enthusiasm, humanity, every time it loses its way, will be able to lift itself up and set out again on the right path. In this sense it has been said with profound insight that “beauty will save the world”.  (St. John Paul Letter to Artists, 1999)

JULIE LONNEMAN  is a freelance illustrator who lives and works in Cincinnati, Ohio where she maintains a studio. Her illustrations on themes of spirituality and social justice have appeared in magazines such as America, Sojourners, and St. Anthony Messenger, and have graced the covers of numerous books and newsletters. Her illustrations were featured on the 2011 Year of Grace calendar published by Liturgy Training Publications  and she recently illustrated a three year cycle of Sunday readings for Living Liturgy, published by Liturgical Press

An amazingly versatile artist, Julie works in many media and styles, but she is best known for her black and white scratchboard images and her colored pencil illustrations. She acknowledges many influences, from tribal, folk, and medieval art to the work of twentieth-century artists Käthe Kollwitz  (my favorite artist of 20th C.) , Fritz Eichenberg and Franklin Carmichael, and  contemporary liturgical artists. Julie is particularly grateful for the insights gleaned from her 25 years of membership in New Jerusalem, a Catholic  lay community founded in the 1970's by Richard Rohr, OFM. His teaching helped her to form the understanding of scripture that underlies her work. 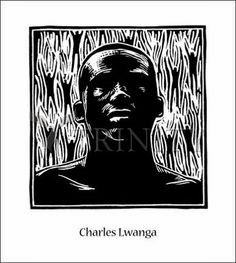 In her "Song of Creation," she shows St. Francis ecstatically singing the Canticle of the Sun: "Though weak and almost blind, he composed this song of praise as the end of his earthly life drew near."

It was also at New Jerusalem that Julie met her husband, Bill, currently an assistant professor of nursing at the College of Mount St. Joseph. They have two daughters, born in 1984 and 1987.

Julie and Bill are actively involved in their working class neighborhood and in Franciscans Network, an organization that supports global human rights work.  Her work is featured at TRINITY STORES

She has said that she is grateful for the "priestly work she has been given as a woman and as an artist."

As a Catholic artist, she recognizes the "sacramental nature of art," through which "we are deepened, refreshed, challenged and re-created."