Pope Francis will canonize  LOUIS and ZELIE MARTIN, the parents of  St. Therese of Lisieux during the world Synod of Bishops on the family on October 18th. The new saints were married in 1858. The couple had nine children, four of them dying in infancy. The five who survived, including St. Therese, all entered religious life. Zelie Martin died of cancer in 1877, at the age of 45 and her husband died when he was 70 in 1894.

The couple was beatified in 2008. They are believed to be the first parents of a saint to be beatified, highlighting the important role parents play in their children's human and spiritual upbringing.

According to the Lisieux shrine's website, a miracle being studied for the couple's canonization involves a little girl in the Diocese of Valencia, . Born prematurely and with multiple life-threatening complications, Carmen suffered a major brain hemorrhage, which could have caused irreversible damage. Her parents prayed for the couple's intercession. The little girl survived and is healthy.

Pope Francis has a special devotion to St. Therese. He used to keep a photo of the 19th-century French Carmelite nun on his library shelf when he was archbishop of . He has said that when he has a problem, he asks St. Therese "not to solve it, but to take it in her hands and help me accept it." As a sign that she's heard his request, he said, "I almost always receive a white rose."

Before opening the October 2014 meeting of the extraordinary Synod of Bishops on the family, Pope Francis venerated the relics of St. Therese, her parents and another couple, Blessed Luigi and Maria Beltrame Quattrocchi (see Blog 2/4/14). The relics were brought to specifically for prayers during the bishops' discussions about family life.

Louis Martin was a successful watchmaker by trade. He also skillfully managed his wife's lace business. Born into a family of soldiers, Louis spent his early years at various French military posts. At twenty-two he entered  the monastery of the Augustinian Canons of the Great St. Bernard Hospice in the . The blend of courage and charity the monks and their famous dogs manifested in rescuing travelers in Alpine snows appealed powerfully to Louis Martin. But the rigorous studies failed him and he became ill and dispirited, abandoning his hopes for the monastic life.


Zelie Guerin was one of 's more talented lace makers. Born into a military family, she described her childhood and youth as "dismal." Her mother and father showed her little affection. She too entered the religious life but learned the  lace-making technique and soon mastered this painstaking craft. Starting her own business, she too became very successful.

Louis Martin and Zelie Guerin eventually met in , and on July 13, 1858, Louis, 34, and Zelie, 26, married. Within the next fifteen years, Zelie bore nine children, seven girls and two boys. "We lived only for them," Zelie wrote; "they were all our happiness."


Sorrow stalked their happy life as the two baby boys, a five year old girl, and a six-and-a-half week old infant girl all died.  Though Zelie was left numb with sadness she kept her strong faith. In a letter to her sister-in-law who had lost an infant son, Zelie remembered: "When I closed the eyes of my dear little children and buried them, I felt sorrow through and through....People said to me, 'It would have been better never to have had them.' I couldn't stand such language. My children were not lost forever; life is short and full of miseries, and we shall find our little ones again up above."
The Martins' last child was born January 2, 1873. She was so frail that doctors feared for the her life. The family, so used to death, was preparing for yet another blow. Zelie wrote of her three month old girl: "I have no hope of saving her. The poor little thing suffers horribly....It breaks your heart to see her." But the baby girl proved to be much tougher than anyone realized. A year later she was a "big baby, browned by the sun." "The baby," Zelie noted, "is full of life, giggles a lot, and is sheer joy to everyone."  This last daughter, named Marie-Francoise-Therese Martin, would later be known as St. Therese, the "Little Flower".  She once wrote in a letter: "God gave me a father and a mother more worthy of heaven than of earth." 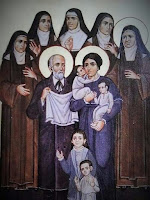 Posted by mother hildegard at 1:30 PM