In a past blog we wrote of a neighboring tribe, the SAMISH. Our connection is from the early days of our foundation when  a friend donated a working copy of  The 'Maiden of Deception Pass': Ko-Kwal-Alwoot. 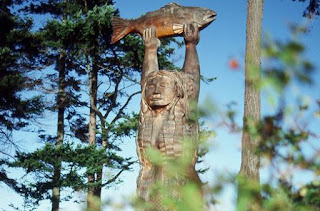 It is an unusual  carved wooden statue of an Indian maiden holding a salmon above her head with both hands. The pole that became the "Maiden" was carved of old-growth western cedar more than five feet in diameter and it depicts the maiden on one side, and on the other her transformation into a mermaid. The salmon she holds aloft is a gift of the sea!

The carving was done by artist Tracy Powell of Anacortes, working with Bill Mitchell, another Anacortes artist, and with Samish Indians, following consultation with members of the Samish Tribe, elders and tribal members who adhered closely to ancient tradition.

What started out as a totem estimated at about 12 feet soon doubled in size when it was discovered that the U.S. Forest Service would donate a cedar from a recent Baker Lake cut.

In regard to objections that a non-tribal member was selected as carver, Powell said: “...I came to an understanding that I would follow tribal instructions, images and techniques. For me to do other things on my own, such as miniature totem poles – that would be wrong.”  The Maiden was completed in a painstaking carving process that took about a year.
Ko-kwal-alwoot commemorates 100 years, celebrated in 1983, of changing relations toward understanding between Indian and non-Indian communities in Skagit County.

According to Samish  tradition, this maiden risked her life to save the tribe from starvation.

Ko-kwal-alwoot, a beautiful Samish Indian girl lived in a village at this site. Her raven-black hair shinned like obsidian, and reached below her waist. One day, as she was gathering seafood near the shore, a young man from beneath the sea saw her. He was very handsome, and his skin shone like silver. His eyes were large and luminous. He immediately fell in love with the young woman. But when this man of the sea asked her father for her hand in marriage, he refused, for fear she would try to follow her suitor, and drown.

The young man warned the maiden’s father that he held great power, and that the seafood would disappear unless permission was granted for his daughter to marry. Her father was a chief, and not disposed to succumb to threats, especially from a fish, so he refused.

Sure enough, clams, crabs and other edibles from the sea became scarce. The nearby sweet spring water dried up, and no longer trickled down the beach. Villagers protested that they were hungry for seafood. Under pressure, the maiden's father granted permission for the marriage.

They were married at the sea's edge. Once again seafood became plentiful, and icy, clear water gushed from the nearby spring. Her father demanded that his daughter return annually so he could check on her well-being.  She returned to her people once a year for four years. Barnacles disfigured her once lovely hands and arms. Her long raven hair was intermingled with long, stringy kelp. Chill sea winds followed wherever she walked, and she seemed unhappy out of the sea, away from her husband.

Legend says her hair can be seen flowing with the tide around the Pass (not to be confused with bull kelp). She lives eternally underwater and ensures that the area has an abundance of food for her people.  She has became immortal in the hearts of her Samish people!

Visitors to Deception Pass may look into the currents of Deception Pass and be fortunate enough to see, along with her own people, in the waters, the Maiden's hair, drifting gently with the tide!

Posted by mother hildegard at 2:10 PM