While perusing art for my Christmas Blogs, I found this woman whose sheep I love, and thought her work appropriate for the season.

Scottish Artist FRANCES WATT is a woman of mystery in contemporary art.  At the peak of her career in the 1960s, she achieved some measure of success as an artistic chronicler of the male-dominated world of money-making in London’s Square Mile financial district. By the early 1990s, Frances and her art were all but forgotten. The recent sale of a cache of pieces, kept in storage for 30 years in Aberdeen, has drawn well-deserved attention back to an artist.

Edith Frances Watt was born in 1923 in Falkirk, Scotland, the daughter of a Church of Scotland minister. When she was three, her father was called to the Scottish Kirk in Geneva, Switzerland, where she spent her childhood. The family returned to Scotland in 1936, and when her father died two years later, Frances and her mother moved to Highgate, London. She would live there unmarried for most of her life, devoting her time to drawing and the local choral society for which she designed programs.

She had formal art training at the Byam Shaw School of Drawing and Painting in London, honing her skills by copying the Great Masters.

Her first public exhibition was in the 1950s. A decade later, she was commissioned by the Council of the Stock Exchange to create a visual record of business activities at The City.


Working in pencil, pen, and watercolor she made hundreds of studies of anonymous financiers at desks and on the trading floors  at the Royal Exchange, the London Discount Market, and Lloyds of London, many of them, used as illustrations in the Times newspaper. Frances's drawings on biblical themes present a very different side of this impersonal chronicler of the Square Mile. 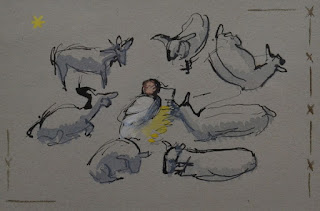 Her love for animals also found expression in a whimsical watercolor of Jesus tenderly taking a roadkill rabbit into his arms. A dog and a sheep also figure as two more traveling companions for the Risen Christ and two disciples in a mixed media painting of the Road to Emmaus story in Luke 24:13-32.

Frances wrote on the margin of the painting: Joy of companionship...The earth is subject to Him...The animals recognize Him...The GREAT PEACE has come into the World...Atmosphere-Peace. 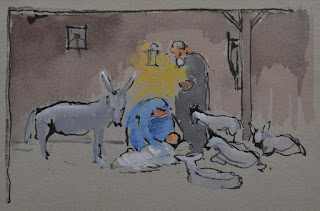 Posted by mother hildegard at 10:56 AM