The Voluntary Aid Detachment (VAD) referred to a voluntary unit providing field nursing services, mainly in hospitals, in the United Kingdom and various other countries in the British Empire.

At the outbreak of the First World War VAD members eagerly offered their service to the war effort. The British Red Cross was reluctant to allow civilian women a role in overseas hospitals: most volunteers were of the middle and upper classes and unaccustomed to hardship and traditional hospital discipline. Military authorities would not accept VADs at the front line.

Katharine Furse took two VADs to France in October 1914, restricting them to serve as canteen workers and cooks. Caught under fire in a sudden battle the VADs were pressed into emergency hospital service and acquitted themselves well. The growing shortage of trained nurses opened the door for VADs in overseas military hospitals. Furse was appointed Commander-in-Chief of the detachments and restrictions were removed. Female volunteers over the age of twenty-three and with more than three months' hospital experience were accepted for overseas service.

VADs were an uneasy addition to military hospitals' rank and order. They lacked the advanced skill and discipline of professional trained nurses and were often critical of the nursing profession. Relations improved as the war stretched on: VAD members increased their skill and efficiency and trained nurses were more accepting of the VADs' contributions. During four years of war 38,000 VADs worked in hospitals and served as ambulance drivers and cooks. VADs served near the Western Front and in Mesopotamia and Gallipoli. VAD hospitals were also opened in most large towns in Britain. Later, VADs were also sent to the Eastern Front. They provided an invaluable source of bedside aid in the war effort. Many were decorated for distinguished service. 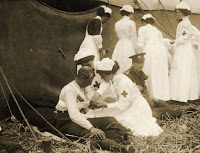 BBC's recent series CRIMSON FIELD is the story of World War I’s front line medics and of their their hopes, fears, triumphs and tragedies. In a tented field hospital on the coast of France, a team of doctors, nurses and women volunteers work together to heal the bodies and souls of men wounded in the trenches. The hospital is a frontier, between the battlefield and home front, but also between the old rules, hierarchies, class distinctions and a new way of thinking.

The girls who volunteer for duty are flung head first into a world for which nothing and nobody could have prepared them, but it is also an opportunity to break free of the constraints and limitations of their lives back home.

One certainly gets a sense of history during war time in these series, and while this one is not as exciting as the Anzac, it is worth watching.

Olive Dent's memoir is a fascinating period piece, a rare first-hand account of this little-known story, which will resonate very strongly with viewers of The Crimson Field.

Posted by mother hildegard at 1:32 PM