THE GIRLS of ANZAC 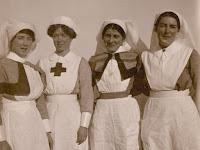 Having watched the wonderfully done series by Australian TV ANZAC Girls (2014) I thought it a good story to follow on the heels of our religious nurses in the Civil War.

The six-part series tells the rarely told true stories of the nurses serving with the Australian Army Nursing Service at Gallipoli and the Western Front during the First World War. The series is based on Peter Rees' book The Other ANZACs as well as diaries, letters, photographs and historical documents.

The action begins as the nurses arrive in Cairo in 1915, taking us to the senseless battle of Gallipoli, where Australian and New Zealand soldiers were caught in a month long stalemate with the Ottoman army. There is plenty of blood and gore and many scenes may be too much for some, but they certainly give pause to what these brave women experienced before the advent of antibiotics and modern technology in the surgery.

By the end of The Great War, forty-five ANZAC (Australian and New Zealand Army Corps) nurses had died on overseas service and over two hundred had been decorated. These were women who left for war on an adventure, but were soon confronted with remarkable challenges for which their civilian lives could never have prepared them.

They were there for the horrors of Gallipoli and they were there for the savagery the Western Front. Within twelve hours of the slaughter at ANZAC they had over 500 horrifically injured patients to tend on one crammed hospital ship, and scores of deaths on each of the harrowing days that followed. Every day was a nightmare but their strength and humanity were remarkable.

This is a very human story from a different era, when women had not long begun their quest for equality and won the vote. They were on the frontline of social change as well as war, and the hurdles they had to overcome and the price they paid, personally and professionally, make them a unique group in ANZAC history.

Posted by mother hildegard at 11:55 AM