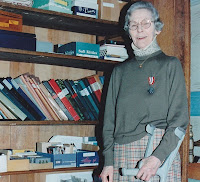 I recently came across  and interesting but unknown woman who  Blessed Teresa of Calcutta called her "Spiritual Powerhouse."  JACQUELINE de DECKER was  a social worker born in Belgium to one of Antwerp's most influential families- one of nine children. She had a great desire to work with Mother Teresa and in 1947 walked half way across India to join, the as yet, little known nun and her order of Missionaries of Charity.

But the Lord had other plans for her and  a chronic, debilitating illness forced her to return to Antwerp for what she thought would be a brief  treatment. It was discovered that she had a severe disease of the spine which  would necessitate a number of operations.  By 1980, Jacqueline had undergone thirty-four operations for her illness, which was never given an official medical label. She called it GGD, or 'God-Given Disease'.

The news of her future was so dreadful to her that she contemplated suicide, but in the autumn of 1952 she received a letter from Mother Teresa:

'Today I am going to propose something to you. You have been longing to be a missionary. Why not become spiritually bound to our society which you love so dearly? While we work in the slums, you share in the prayers and the work with your suffering and your prayers. The work here is tremendous and needs workers, it is true, but I also need souls like yours to pray and suffer. '

Jacqueline took up the task of promoting this apostolate of prayer and self-offering among the sick, linking each person who became a “Sick and Suffering Co-Worker” with an individual Missionary of Charity. From the beginning of her work, Mother Teresa welcomed and sought the help of lay persons.

Eventually those attracted to her and her work formed a group called the Co-Workers of Mother Teresa. Coming from all religions, nations and walks of life, these men and women share in Mother Teresa’s aim to quench the thirst of God for love and souls by seeking to give Him their love and to bring His love to every person with whom they have contact, especially the poorest of the poor, and, above all, those most needy in their own families.

From her home in Antwerp Jacqueline managed to co-ordinate the Link for the sick and suffering, as well as look after the welfare of some 2,000 prostitutes.

" Everyone and anyone who wishes to become a Missionary of Charity, as carrier of God's love is welcome. But I want especially the paralyzed, the crippled, the incurables to join, for I know that they will bring many souls to the feet of Jesus. The Sisters and the Brothers will each have a co-worker who prays, suffers, thinks, writes to her/him and so have a "second self". We shall be able to do great things for the love of Him, because of you." (Mother Teresa)

More of her life can be read in Kathryn Spink's Autobiography of Mother Teresa.

Jacqueline De Decker died on Friday, April 3, 2009. I am sure she is counted among the saints, many who suffer for the souls of others, many we will never know about!