Several years ago, when doing some studies on Benedictine saints and birds, I came across a lovely painting of St. Meinrad though I could not find the artist's name.  I have found him and here present some of his work.

BROTHER MARTIN ERSPAMER, O.S.B.,  (B. 1953) is a Benedictine monk of St. Menirad Archabbey in southern . He attended a and became influenced by the work of the Marianist artists, joining their community in 1971. He worked several years in their missions in .  He received an MFA from in 1986 and began his career as a liturgical artist working in painting, illustration, ceramics, stained glass, furniture and worship space design. 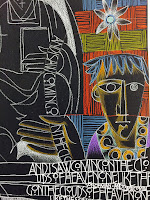 In 2004 Brother Martin became a monk himself, moving to St. Meinrad Archabbey. He has creatively renovated over fifty churches and his stained glass designs have transformed many worship spaces. Brother Martin's religious illustrations are well known and his art has been used on covers for many missals. His art celebrates the Benedictine motto - "that in all things may God be glorified."

He also loves cooking and music. “The longer I stay in religious life, the more there is to learn and internalize. The monastery is a good place to learn. It is a school for conversion of heart and for charity. This is where I belong.”

Posted by mother hildegard at 9:36 AM