Considering the state that Turkey is in today I think this Blessed is a fitting patron.

BL. IGNATIUS MALOYAN the son of Melkon and Faridé, was born in 1869, in . His parish priest, noticed in him signs of a priestly vocation, so he sent him to the convent of Bzommar-Lebanon when he was fourteen years old.

After finishing his studies in 1896 he was ordained in the convent, becaming a member of the Bzommar Institute. He took the name of Ignatius in remembrance of the famous martyr of . During the years 1897-1910, Father Ignatius was appointed as parish priest in and , where his holy reputation was wide-spread.

His Beatitude Patriarch Boghos Bedros XII appointed him as his assistant in 1904. Because of a disease that hit his eyes, and suffering difficulty in breathing, he returned to and stayed there till 1910.

The Diocese of Mardin was in a state of anarchy, so Patriarch Sabbaghian sent Father Ignatius Maloyan to restore order.

In 1911 he was elected Archbishop of Mardin. He took over his new assignment and planned on renewing the sad state of affairs of the diocese, encouraging the devotion to the Sacred Heart. Unfortunately, at the outbreak of the First World War, the Armenians resident in (which was allied with ) began to endure unspeakable sufferings. 1915 marked the beginning of a veritable campaign of extermination of the people. The Turkish soldiers surrounded the Armenian Catholic Bishopric and church in Mardin on the basis that they were hiding arms. 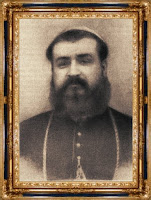 The Bishop gathered his priests and informed them of the dangerous situation. On June 3, 1915, Turkish soldiers dragged Bishop Maloyan in chains to court with twenty seven other Armenian Catholics. The next day, twenty five priests and eight hundred and sixty two believers were held in chains. During the trial, the chief of the police, Mamdooh Bek, asked the Bishop to convert to Islam. The bishop answered that he would never betray Christ and His Church.

Mamdooh Bek hit him on the head with the rear of his pistol with orders to put him in jail. The soldiers chained his feet and hands, threw him on the ground and hit him mercilessly. With each blow, the Bishop was heard saying "Oh Lord, have mercy on me, oh Lord, give me strength", and asked the priests present for absolution.

His mother visited him in jail and cried for his state. But the valiant Bishop encouraged her. On the next day, the soldiers gathered four hundred and forty seven Armenians.  The bishop encouraged his parishioners to remain firm in their faith. Then all knelt with him as he prayed to God that they accept martyrdom with patience and courage. The Bishop took out a piece of bread, blessed it, recited the words of the Eucharist and gave it to his priests to distribute among the people. 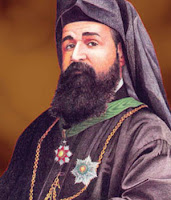 One of the soldiers, an eye witness, recounted this scene: "That hour, I saw a cloud covering the prisoners and from all emitted a perfumed scent. There was a look of joy and serenity on their faces". After a two-hour walk, hungry, naked and chained, the soldiers attacked the prisoners and killed them before the Bishop's eyes. After the massacre  Mamdooh Bek then asked Bishop Maloyan again to convert to Islam. The soldier of Christ answered: "I've told you I shall live and die for the sake of my faith and religion. I take pride in the Cross of my God and Lord". Mamdooh was furious. He drew his pistol and shot Bishop Maloyan. Before he breathed his last breath he cried out loud: "My God, have mercy on me; into your hands I commend my spirit". 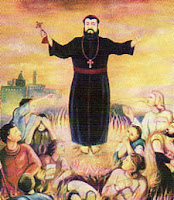 I love the sculpture of RAFFI  YEDALIAN  (top of page), who born in in 1973. His works express emotion, inspired by his experience, environment and recollections.

In 2015, he presented his painting of Bl. Ignatius  to Pope Francis, in St. Peter's Basilica. This painting was then reproduced and issued as one of the Vatican's postage stamps.

The artist’s works are on view in permanent collections including in the .
Posted by mother hildegard at 6:34 AM