A LOVER OF THE SACRED HEART

As I have said in past Blogs, anyone who has a devotion to the Sacred Heart of Jesus, has my attention. My Jesuit adviser in college started me in the Apostleship of Prayer devotion, which I continue to this day.  Also, I tell people who come to the monastery that the world needs more lay saints. People often think the only path to holiness is in the religious life.  More and more we are seeing very holy people who lived their lives in the world, spreading the love of Christ as they went about their not so ordinary lives. 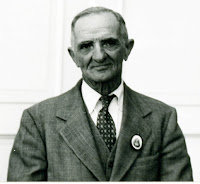 SERVANT of GOD AUGUSTE (NONC’O)  PELAFIGUE was born in a pastoral zone in Beaucens at the foot of the in in 1888. This is a region near Argeles-Gazaste. He was nearly two when his parents immigrated to the . He and his family had a deep rooted Catholic faith upbringing instilled in them.

Their charming village, Beaucens, was about seven miles from where the Blessed Mother appeared to St. Bernadette. Another French saint, John Vianney, the Cure Ars, was a saint Nonco modeled his life on, through prayer, good works, mortification, all for the love of God. Nonco's simplicity and later in life his spreading devotion to the Sacred Heart.

Nonco lived in . He attended school at the convent located near where the Little Flower Chapel now stands. He had a great reverence for the nuns. He read and wrote fluently in English and French. , later attending the of at .

In Nonco's early life, he was a teacher. Mornings he boarded a train in Arnaudville to go to Port Barre. He never married and lived a life of extreme austerity. He was noted by those who knew him to be a very kind and gentle person who did whatever he could for people.  He was very poor, but he wouldn't take money from anyone. When family members fixed food for him, he would give it away.  He lived in a small house without electricity and walked everywhere. He wouldn't accept a ride from anyone as he felt  that was part of his penance to God.  He also ministered to the sick or anyone in need.

Nonco  loved animals, especially birds  (another reason i like this man).  His property was teeming with guinea hens, bantam roosters, pigeons, exotic birds, such as parrots, and peacocks.
In 1909 at the age of 21, Nonco became a member of the Apostleship of Prayer League. He is best remembered as a promoter of the League where, it is said, he left an imprint on the shoulder of the dirt and gravel roads as he traveled on foot to deliver the Sacred Heart leaflets.
n 1953, at the age of 65, Nonco was given the Papal Degree by Pope Pius XII referring to him as a "REAL CHRISTIAN." It was not surprising that Nonco died on the Feast Day of the Sacred Heart of Jesus which was on June 6th in 19 at the age of 89.  For 68 years of his adult life, "Nonco" served the Lord, attending Daily Mass and serving St. John Francis Regis Catholic Church, Little Flower School and the Arnaudville community for little or no pay.

Thirty five years after Nonco's death, in 2012, a nonprofit corporation was formed to work towards the beatification and canonization of Auguste "Nonco" Pelafigue. The Foundation is following the procedures outlined by the church and, at the invitation of the Diocese of Lafayette, on November 9, 2014,
Posted by mother hildegard at 10:29 AM