In the last Blog, I presented a letter from the Subprior of the Benedictine Monastery damaged in the earthquake in Italy last week.  Our Mother Prioress visited the Community a few years ago when in Italy and she says it is one place she would go back to. The holiness of the place and the monks was greatly perceived. A bit more about these courageous men.

In the 8th century an oratory was built so pilgrims could pray at the place of St. Benedict and his sister St. Scholastica’s birth. Monks came to Norcia in the 10th century, and remained in one form or another until 1810, when they were forced to flee under the new laws of the Napoleonic Code.

The current Benedictine community was founded in in 2000 by a small group of American monks “with faith and courage and little else”. The founder and present Prior, Father Cassian, was a monk of St. Meinrad's Archabbey in Indiana. One of our interns attended Wyoming Catholic College and one of her professors is now a member of this Community.

The monks were charged by to care for the Basilica of San Benedetto (built over the birthplace of St Benedict and his twin St Scholastica) and for the many visiting pilgrims. The Benedictines of Norcia see themselves as "humble instruments for the necessary New Evangelization of Europe". 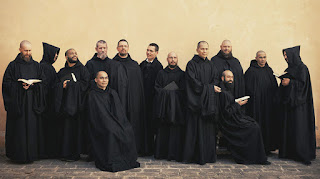 In February 2012 the Monastery was canonically established under the supervision of the Abbot Primate of the Benedictine Confederation.   The monks have supported themselves by making beer- in the grand tradition of the Belgian Trappists (whom they learned the craft from).  It is made in small batches, so as not to effect the prayer life of the monastery.

They have also produced a CD of their chant which is lovely and very prayerfully rendered.

One can go to their website and see some lovely videos of their life- before and after the earthquakes.  (Monks of Norcia.org)

Posted by mother hildegard at 9:18 AM