FRIEND of the EUCHARISTIC JESUS

Although Mother Yvonne-Aimée is not yet recognized by the Church as a saint, her story suggests that she likewise found that, through her own wounds, she was able to draw closer to the wounded and resurrected Christ. She is thus a good  model for us to reflect upon in Holy Week. 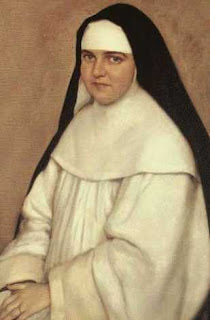 SERVANT of GOD MOTHER YVONNE-AIMEE de JESUS (Yvonne Beauvais) was an Augustinian Canoness, Hospitaller of the Mercy of Jesus, of the Monastery of Malestroit in Brittany, France. Born in 1901, Mother Yvonne-Aimée died, after a life of extraordinary love and extraordinary suffering, 49 years old in February of 1951.

Her father died when she was three and she went to stay with her maternal grandmother. She returned to live with her mother the following year, staying at boarding schools where her mother was director. At the age of twenty, she joined with the Association of the Children of Mary Immaculate in serving the poor.

She fell ill the following year with typhoid fever and was treated at a small hospital at Malestroit run by the Augustinian Sisters of Mercy. In March 1927, she entered the convent at Malestroit as a postulant. In 1935, she was elected mother superior for the community.

She helped Allied soldiers and French resistance fighters during World War II by sheltering them at the hospital and aiding their escape. She is said to have disguised some Allied airmen as nuns. She was awarded the French Legion of Honor by General Charles de Gaulle.

General Audibert, chief of the Western Resistance, was the witness and one of the beneficiaries of the hospitality which she offered to the wounded parachutists or men of the Maquis during the occupation. Surprised by her courage and her presence of mind in the enormous danger and risks that she took in the name of this Christian hospitality, he greeted her with a smile and these two words: “My General.” And, when he heard of her death, he wrote painfully: “When someone with this clarity, this power, this grandeur disappears, it seems that the sky is darkened for us.”

In 1946, she established the Federation of the Augustinian monasteries and became its first Superior General. In early 1951, she was planning to visit nuns of the order in Natal, South Africa. However, she died in February before her departure at the age of 49 from a cerebral hemorrhage.

It is all to the credit of her spiritual son, Father Paul Labutte, that, after more than fifty years of silence, he chose to reveal one of the most painful secrets of her life. On 10 August 1925, three men ambushed Yvonne Beauvais, then twenty-four years old, in the suburb of . The three men beat Yvonne, and tortured her. One of the three was a depraved priest, whom she had previously tried to help by addressing to him a warning from Our Lord. The reprobate priest later repented of his crime and was converted. Father Labutte chose to write of this episode in the life of Yvonne-Aimée, believing that victims of similar crimes would take comfort in seeking the intercession of one with a personal experience of their suffering. 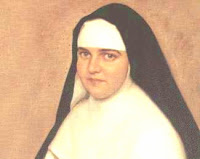 During her life, Mother Yvonne-Aimée had a particular mission to priests. She was sensitive to priests in moral distress and in temptation. She readily took on the sufferings of priests. She calmed many a troubled conscience, dispensed wise motherly advice, and communicated joy and hope to priests haunted by depression and tempted to despair. Only those who were very close to her know to what point she suffered, in a great spirit of Redemption, most especially for priests. She was a mystic in the true sense of the word.


“I am all weakness, he will be my strength. I am not afraid of the cross he has presented me. I will suffer with all my heart for the intention you recommended to me: for priests!”

Posted by mother hildegard at 10:36 AM